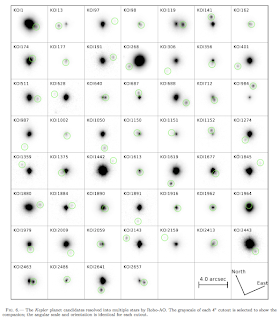 The Robo-AO Kepler Planetary Candidate Survey is designed to observe every Kepler planet candidate host star with laser adaptive optics imaging to search for blended nearby stars, which may be physically associated companions and/or responsible for transit false positives. In this paper we present the results from the 2012 observing season, searching for stars close to 715 representative Kepler planet candidate hosts. We find 53 companions, 44 of which are new discoveries. We detail the Robo-AO survey data reduction methods including a method of using the large ensemble of target observations as mutual point-spread-function references, along with a new automated companion-detection algorithm designed for large adaptive optics surveys. Our survey is sensitive to objects from 0.15" to 2.5" separation, with contrast ratios up to delta-m~6. We measure an overall nearby-star-probability for Kepler planet candidates of 7.4% +/- 1.0%, and calculate the effects of each detected nearby star on the Kepler-measured planetary radius. We discuss several KOIs of particular interest, including KOI-191 and KOI-1151, which are both multi-planet systems with detected stellar companions whose unusual planetary system architecture might be best explained if they are ''coincident multiple'' systems, with several transiting planets shared between the two stars. Finally, we detect 2.6-sigma evidence for less than 15d-period giant planets being 2-3 times more likely be found in wide stellar binaries than smaller close-in planets and all sizes of further-out planets.


KOI-268 has an exoplanet in the habitable zone.
Posted by Will Baird at Thursday, December 26, 2013