State Failure is On the Russian Mind 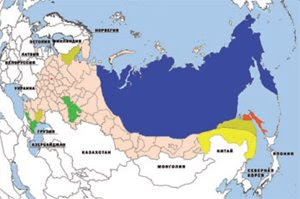 Drawing on the information models of D.S. Chernyavsky, scholars at the Moscow Institute of Applied Mathematics at the Russian Academy of Sciences have concluded that Russia is rapidly entering a period of “semi-collapse,” in which large parts of the country will either fall under the influence of other countries or separate completely.

According to the model they have employed, “the North, the Eastern and part of Western Siberia will fall under the influence of the US, that Sakhalin and the Kuriles ‘will go’ to Japan, that part of the Far East will fall ‘under China, that a Muslim enclave will arise in the Middle Volga, and that a North-West Republic will emerge around the Kola Peninsula.”

“In order to avoid this outcome,” Georgy Malinetsky writes in his description of their findings in the current issue of “Computerra,” Russian “society will be required to devote extraordinary efforts.” His own description of the situation makes clear why that is so.

Russia, he says the scholars have concluded, currently faces two “unpleasant” possibilities. On the one hand, it faces the likelihood that the price for its major export commodities – oil and gas -- will continue to fall as current consumers seek alternative sources energy supplies.
As L. Badalyan and V. Krovorotov have concluded, Malinetsky points out, “when a serious deficit of any resource emerges, people will search and find a new one, and as a result, the price and importance of the one they had been using will fall dramatically,” an outcome that will hurt Russia more than most because its production of these things is already falling.

And on the other hand, European and American officials are not going to ignore the problems Russia now has and will have in the future. Instead, acting on the basis of notions likes like “Siberia ought to belong to all humanity,” they will get more involved and in ways that will threaten Moscow’s control over much of the country.

Hat tip to Window on Eurasia.

The idea of state failure, especially of large, seemingly powerful nations apparently is plaguing the Russian psyche these days. First there was the Russian prof that has been running around stating America is going to meltdown into multiple nations (see below). Now there is a prof stating that Russia might meltdown...again (link at top is a Google translation of his 'paper'). It could be that the dissolution of the Soviet Union has left scars. Actually, that's probable.

On the other hand, this may be a carrot and stick situation. The Russians are giving hope (The US will melt! Russia can rise in the aftermath!) and adding a bit of fear (Russia might collapse completely), so let's all rally around the flag, or rather The Leader, lest after him, the deluge. The 'artful' use of the ancient enemy of Europe and China plus the recent, hateful antagonist of America, is what really makes me think this is the case.

Perhaps I am wrong. What do you all think?

I think that picture came from this link

Aside from that, I'd suggest a much more thoughtful (bittersweetly hilariously so) russian professor in the form of Dmitri Orlov

omg, they're using Jay Forrester's System Dynamics. The guy thought that the future could be analyzed like a circuit component. It's the methodology behind Limits to Growth, perhaps the most influential crappy computer model ever, and it looks like it still is producing similar results.

I agree, either he's a loon or this is "rally around the flag". Or maybe we really will take control of some of Russia while China takes control of us. The combined scenario has my vote.

That's funny, Carlos! I thought it looked familiar, but I couldn't place their train of thought where I'd seen it before. How damned funny. Forrester that man that bequeathed intellectual herpes!

Tom. I don't think China is going to eat us. I think they're a threat, big time, but we're about to see how resilient their system is here shortly. The economic equivalent of a famine is about to hit and we'll see how well their regime and economy will do. China had the great fortune to grow their economy in a hot house and suddenly the windows and doors have been thrown wide open in January.

I was just joking. Apologies on not making that clear. Well, I was serious about the other guy(s) doing the original studies as being loons (again, and/or pushing propaganda as you mentioned, which I guess depends on how seriously people in Russia take him).

The top map seems to be based on a diffusion model of influence projection. Because northeastern Russia is so sparsely populated, under that assumption *any* power is going to spread like butter over the region.

More interesting to me is the shaded region near Finland. Apparently St. Petersburg will soon fall under the Suomic whip (although I believe some people pay for that privilege).

The top map seems to be based on a diffusion model of influence projection. Because northeastern Russia is so sparsely populated, under that assumption *any* power is going to spread like butter over the region.

They did offer to sell it to us once upon a time. Maybe that plagues their thoughts too.

More interesting to me is the shaded region near Finland. Apparently St. Petersburg will soon fall under the Suomic whip (although I believe some people pay for that privilege).

Frankly, the whole thing is just goofy. However, it seems to have its place as fear mongering and the like.

However, the Suomic March on Moscow would be freakin awesome.

And I'm sure Germany would send a gunboat to Kaliningrad -- errrr -- Königsberg... ;-)

I just can't imagine a Canadian using "Zed" for Z in Missouri and living long enough to have any significant effect on the government.

heh, TW, I suspect that the Russian prof that generated that map is just plain bonkers. He really doesn't understand us. Hell, my wife, a Ukrainian immigrant, has been slowly coming to grips with the fact that Americans are just soooo...alien.