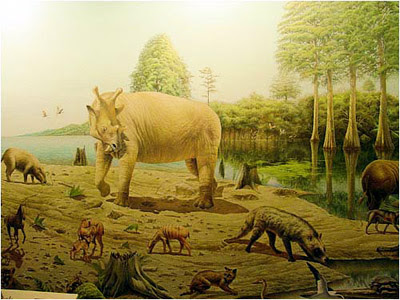 Methane released from wetlands turned the Earth into a hothouse 55 million years ago, according to research released Wednesday that could shed light on a worrying aspect of today's climate-change crisis.

Richard Pancost, a researcher at Britain's University of Bristol, seized an opportunity to dig, literally, into this mystery.

Excavation of a site in southeast England to set down the Channel Tunnel rail link exposed layers of sediment from a bog that had existed at the time of the PETM.

Pancost's team sifted through the dirt to measure the carbon isotope values of hopanoids, which are compounds made by bacteria.

They found that levels of these isotopes suddenly fell at the onset of the PETM, yielding a signature that can only be explained if the bugs dramatically switched to a diet of methane, a powerful, naturally-occurring greenhouse gas.

Reporting in the British journal Nature, Pancost believes that the methane had remained locked up in the soil for millions of years before warming released it into the atmosphere.

As atmospheric methane levels rose, so too did Earth's temperature as a result of the famous "greenhouse" effect. In turn, that released more methane, and so on.

In other words, it was a vicious circle (a "positive feedback" in scientific parlance), in which warming begat warming.

The study has relevance because of the gigatonnes of methane locked in the Siberian permafrost today.

Interesting. See more on the Eocene Ocean here. It was weird if you use our current ocean as the baseline 'as it should it.' It goes a long way towards something that I encountered when I liveblogged the paleoclimate modsim conference: don't cut and paste modern climate/ocean currents/whatever into the past simulations. It just gives you bad output: crap in, crap out.
Posted by Will Baird at Wednesday, September 19, 2007