There has been a flash of papers and news stories about fossils in the Permian Period. Rather than do a microflood of individualized posts, I'm going to just aggregate them to save time and space with a single post. Those of you that follow this blog on a regular basis know that I've got a huge soft spot for all things paleo and especially the Permian Period.

First up is Muller and Tsuji's PLoS Paper entitled "Impedance-Matching Hearing in Paleozoic Reptiles: Evidence of Advanced Sensory Perception at an Early Stage of Amniote Evolution:" 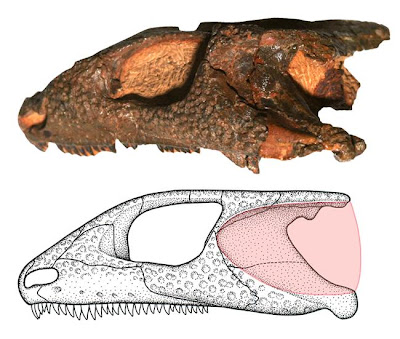 The ability of modern animals to hear a wide range of frequencies, highly important for prey capture, escape, and communication, was long assumed to have only evolved shortly before the origin of dinosaurs, not much longer than 200 million years ago, and therefore comparatively late in vertebrate history.

But these fossils demonstrate that this advanced ear was in existence much earlier than previously suggested. In these small reptiles the outside of the cheek was covered with a large eardrum, and a bone comparable to our own hearing ossicles connected this structure with the inner ear and the brain. Müller and Tsuji also examined the functional performance of this unique and unexpected auditory arrangement, and discovered that these little reptiles were able to hear at least as well as a modern lizard.

There's now evidence that the synapsid line was doing parental caring long before the archosaurs:

A South African fossil suggests pelycosaurs - intermediates between reptiles and mammals that lived in the Permian Period before the rise of dinosaurs - may have been caring parents 260 million years ago, scientists said on Wednesday.

Jennifer Botha-Brink of South Africa's National Museum and colleagues found a fossilized group consisting of an adult pelycosaur and four juveniles arranged in a family group. The youngsters appear to be siblings.

From the less scientific Yahoo News.

Finally, the oldest fossil foot prints that have been traceable to a particular set of fossils have been found: 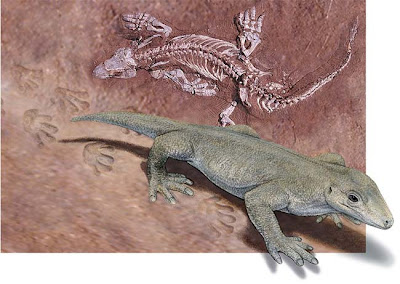 Two reptile-like animals living 290 million years ago are the oldest creatures to have their footprints positively identified after a fortuitous discovery allowed scientists to match fossils to preserved trackways.

Fossils of Diadectes absitus and Orobates pabsti were recently found in the Tambach Formation in central Germany. Nearby and in the same sediment layer, scientists found well-preserved footprints made by creatures that plodded through the region's soft sediments long ago. The footprints turned out to be a match for the fossil animals.

The work, detailed in the latest issue of the Journal of Vertebrate Paleontology, marks the first footprints of the Paleozoic Era, a time before the dinosaurs that lasted from 540 to 240 million years ago, to be associated with the animals that made them. It could also force scientists to rethink how the ancient creatures moved.

Because of the exceptional preservation of the Tambach skeletons, scientists were able to match them to the nearby footprints. The two species were among the first four-legged plant eaters on land and have no close living relatives.