The Ecology of the Carbon Age 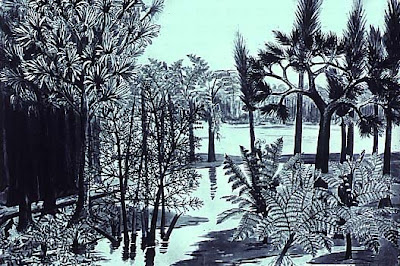 I promised to get a post out soon on the Carboniferous ecology. I am a little bothered by guilt that I haven't done so already, but frankly I have been really overwhelmed with preparations for the Team Phoenicia work. I thought I'd try to get one good paleo post out since I have been offline for the better part of a week. So, let's quickly squeeze out a post to address half of what I wanted to talk about before. 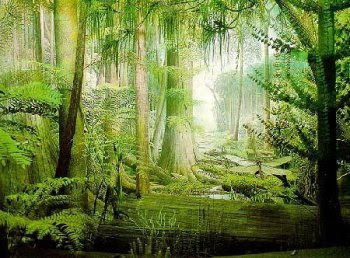 One of the big questions that gets asked alot is why did the Carboniferous have such vast amounts of coal laid down during its time span? There are other coal deposits, to be sure, but why in the world was there just so much then? One of the suggestions was that the trees that grew then were stuffed with lignin, much more so than now, and that life handed developed, especially fungal life, the ability to munch on lignin.
Lignin is a chemical compound that is a part of wood. It's a structural component that fills the space between cellulose and other bits in the plant cell wall. It's also vitally important in transporting water throughout the plant. It's also completely indigestible to any animal without the aid of fungal or bacterial symbiont. Read more about lignin here. Some of the most common trees of the day were the lycopods and they had mcuh larger amounts of lignin their bark - and the bark was the main support structure btw - than modern trees. An interesting aside is that gymnosperms have a moderate amount of lignin in their structure and angiosperms have very little. Relatively speaking.

There were plenty of detrivores during the Carboniferous. They were in fact the primary method of transferring energy from the plant kingdom to the animal kingdom: there were exceedingly few herbivores until the end of the period. One of the most famous detrivores is Arthropleura: 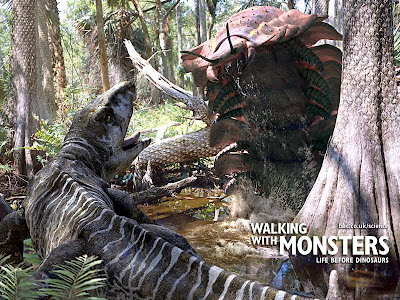 Detrivores eat plant material that fungi and bacteria have already munched on enough to make it edible. Consider it the stage before herbivory or these guys are the vultures of the plant world. With the fact that the animal kingdom still can't digest lignin now without help, it has to be a very difficult chemical pathway for the digestive system to produce even after a good 300+ million years of time since the Carboniferous. In all that time, not once has anything stumbled even halfway across the secretions needed to chew up lignin. Boggle that.

However, as I stated, fungi and bacteria can and do digest lignin and cellulose. This has made some think that the problem might have been that the fungi of yesteryear were not as efficient or incapable of digesting the plant matter. This appears to partially, but mostly not true. The environmental conditions where the coals seams were laid down were such that it limited the time that the fungi had to work on the fallen organic matters quite a bit. However, in a study, done on the fallen plant matter in different regions that were approximately cotemporal that was in Evolutionary Paleoecology showed something else. Something interesting. After sampling several different locales, Raymond, Cutlip, and Sweet found in Rates and Processes of Terrestrial Nutrient Cycling Before Beetles, Termites, and Flies that there was something interesting there. Something not what they expected.

One of the most important precursors for something to be broken down is surface area. The more surface area, the faster chemicals can react with it. As leaves or other organics fall from trees, they pile up. They make layer upon layer on the ground until they have produced the characteristic mat that many forests have. There, the material gets broken down. Nothing new here. This is the same old story. Except that there was one big, bug difference. 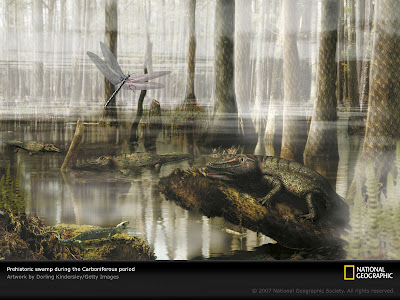 That difference came in two parts. First and foremost, there was a huge, huge deficit as far as burrowing activity in the Carboniferous deposits that the authors looked at. They seem to find evidence of some, but really, very little. It seems that the insects that would do such a thorough job in the latter days didn't exist (duh), but nothing was there that filled the same niche. This is critical! There becomes less, much less surface area for the fungi and bacteria to attack and break the organic material down. Instead of having lots of crevices and burrows and whatnot, they worked on the surface. A surface that was being recovered relatively quickly. This really reduced the amount of material that was recycled.

The second difference was interesting as well. It seems that the detrivores of the time, and handful of herbivores, did not eat the surface of the leaves: very few were skeletonized. Normally, a leaf gets the "skin" munched on first leaving the veins and whatnot afterwards. During the Carboniferous, it appears that the detrivores and herbivores punctured the leaves and ate the insides sans veins while leaving the exterior largely intact. Now, that's another source of carbon to be buried simply because its not being eaten.

Think about that now for a minute. We have three different effects that are amplifying the potentiality of laying down coal. The first is the same as what's been around for a long time: the climate and local environmental conditions were such that coal was likely to be laid down: it still happens today, but not nearly on the scale that it did in the past. Second, we have a definite lack of detrivores that burrow through the debris in the forests. This reduces the surface area that the fungi and bacteria can munch on. Then, finally, the parts being eaten by the detrivores were a lot less than now. Then when you add it all together, the wave is amplified three times over and you gets zeta-sized seams of coal. 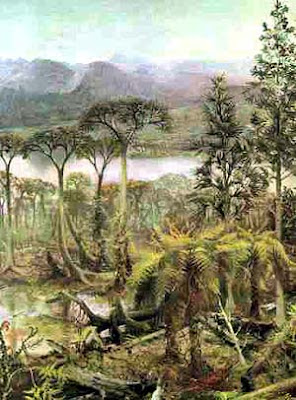 The really interesting thought is that barring a mass extinction that wipes out the vast, vast majority of everything, perhaps everything in the terrestrial environment, the coal lay down that gave the Carboniferous its name will be a one time event. It will simply be impossible to to have the detrivores that we have today simply go away. The burrowing will not go away. Nor will the fact that the detrivores can now eat a lot more of the fallen plant matter. In fact, angiosperms have a lot less lignin which makes them easier to digest and that in turn makes them more likely to have their nutrients and carbon cycled back through the ecosystem. All of that adds up to there not ever being that much coal being laid down ever again. Ever.

Like the climates of times past, the ecologies never repeat themselves either.

And that is half of what I promised on the Carboniferous Period. The other half will be written hopefully for next time's Bone Yard.
Posted by Will Baird at Tuesday, August 26, 2008

This is a brilliant post. I would seriously recommend submitting this to The Open Lab when the time comes.

Thank you for the compliment, but while I think this post is a good one, but I wouldn't call it brilliant. I feel the Stop Dreaming post is a much better one.