Global Warming Round Up 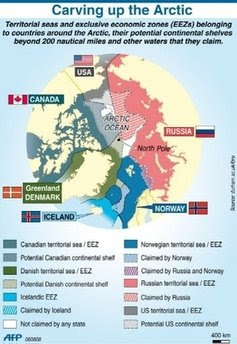 First up, a map of where the different polar nations are going to get 'claims' on the thawing Arctic.

Climate change may cause grasslands to spread to parts of the United States that are currently covered in forest, a new study says.

If local climates become more extreme due to global warming, then entire ecotones—boundaries between ecosystems—could shift, the study says, highlighting the central United States, where prairie gives way to forests of the east.

"If the climate becomes more variable year-to-year, then potentially, you may have less vegetation, more fire, then shifts in these different boundaries," he said.

"If there was no variability, then the whole forest in the eastern United States would shift into the central United States," Notaro said.

Over the course of decades, if global warming causes extreme weather, as expected, the opposite will occur: Grasses, which go dormant during drought and thrive after fire, would move east to exploit the habitat of trees that are unable to compete for scarce resources and ravaged by wildfires.

The ecotone transition from closed forest to open canopy is, by nature, highly variable, said Ronald P. Neilson, a scientist with the U.S. Forest Service in Corvallis, in Oregon.

An increasingly extreme climate "would tend to push the ecosystem to a lower density of overstory [forest canopy] and a more open type of a system," said Neilson, who is not involved with the new study.

Notaro used a dynamic global-vegetation model with climate data from the 20th century for his study, which appears in the journal Climate Dynamics.

In some ways that's a case of obvious, but they actually did the leg and sim work back it up. It is going to be interesting to see what sort of ecosystems emerge in the end. Some people have stated that we are headed back to an Eocene ecosystem...sans the global tropical oceanic conveyor belt. Others have suggested that the Oligocene is coming back. Still others are commenting that we will all die in the return of the Permian climate (ick). As much as I think the return of the Eocene would be really kewl(!!!) - I mean, tropical rain forests in Wyoming! and boreal and antarctic temperature forests, folks! - it is just not going to happen. Whatever climate we get, it will be something completely new: our world doesn't do repeat gigs wrt the global climate.

Such a scenario could make floods fiercer, damage more crops, and worsen the spread of diseases such as malaria, scientists say.

The study team analyzed satellite images of rainfall over tropical oceans over nearly two decades, from 1988 to 2004.

The researchers found that during El Niño years, which tend to be warmer, rain fell in heavier showers. An El Niño is a climate event where the flow of abnormally warm surface Pacific waters temporarily changes global weather patterns.

"This is something that climate models had predicted," Allan said. "But getting the data from observations is very important."

Many previous rainfall pattern studies have relied on measurements from rain gauges. Such gauges are sparsely distributed across land, Allan said, whereas satellites can see large areas as a whole.

For every 1.8 degree Fahrenheit (1 degree Celsius) rise in global temperature, heavy rain showers became more common, with most intense category jumping 60 percent, says the study, which will be published tomorrow in the journal Science.

For the New Mexicans, imagine the flooding from Dolly every year. That may be what's coming...without the snowpack, so water sources ought to be funky. It's not to say that there won't be enough water, but rather that the way that desert folk in the Southwestern US collect it will have to change. More Elephant Buttes, so to speak, are needed.

Warmer temperatures and longer dry spells have killed thousands of trees and shrubs in a Southern California mountain range, pushing the plants' habitat an average of 213 feet up the mountain over the past 30 years, a UC Irvine study has determined.

White fir and Jeffrey pine trees died at the lower altitudes of their growth range in the Santa Rosa Mountains, from 6,400 feet to as high as 7,200 feet in elevation, while California lilacs died between 4,000-4,800 feet. Almost all of the studied plants crept up the mountain a similar distance, countering the belief that slower-growing trees would move slower than faster-growing grasses and wildflowers.

This study is the first to show directly the impact of climate change on a mountainous ecosystem by physically studying the location of plants, and it shows what could occur globally if the Earth's temperature continues to rise. The finding also has implications for forest management, as it rules out air pollution and fire suppression as main causes of plant death.

"Plants are dying out at the bottom of their ranges, and at the tops of their ranges they seem to be growing in and doing much better," said Anne Kelly, lead author of the study and a graduate student in the Department of Earth System Science at UCI. "The only thing that could explain this happening across the entire face of the mountain would be a change in the local climate."

The study appears online the week of Aug. 11 in the Proceedings of the National Academy of Sciences

There was a similar study in Scandinavia about the treelines there. One of the concerns is that as the different zones on mountains are pushed higher that the area that these environments have are decreasing. Decreased habitat == tres bad.

Dramatic year-to-year temperature swings and a century-long warming trend across West Antarctica are linked to conditions in the tropical Pacific Ocean, according to a new analysis of ice cores conducted by scientists at the National Center for Atmospheric Research (NCAR) and the University of Washington (UW). The findings show the connection of the world's coldest continent to global warming, as well as to periodic events such as El Niño.

"As the tropics warm, so too will West Antarctica," says NCAR's David Schneider, who conducted the research with UW's Eric Steig. "These ice cores reveal that West Antarctica's climate is influenced by atmospheric and oceanic changes thousands of miles to the north."

The research appears this week in the online Early Edition of Proceedings of the National Academy of Sciences. The work was supported by the National Science Foundation, NCAR's sponsor.

Scientists are keenly interested in whether warming will destabilize the West Antarctic ice sheet over a period of decades or centuries. The ice sheet covers an area the size of Mexico, averages about 6,500 feet deep, and, if melted, would raise global sea levels by about 8 to 16 feet (2.5-5 meters).

Antarctica's climate is difficult to study, partly because there are few observations of this vast and remote region and partly because the cold, dry atmosphere is unlike that of the other six continents. Scientists previously determined that Antarctica overall probably warmed by about 0.4 degrees Fahrenheit (0.2 degrees Celsius) in the last century. But it has not been apparent until now that low-lying West Antarctica is more responsive to global warming trends than East Antarctica, where wind patterns have largely kept out comparatively warm air.

Schneider and Steig estimate that West Antarctica warmed about 1.6 degrees F (0.9 degrees C) over the 20th century. That is slightly more than the global average of about 1.3 degrees F (0.7 degrees C). Because of the large swings in annual temperature during the 1930s and 1940s, there is a considerable margin of uncertainty in the century-long estimate, says Schneider. He notes that there is increased confidence that warming has occurred since 1950, averaging about 0.8 degree F (0.4 degrees C) per decade.

The new set of cores analyzed by Schneider and Steig comes from a relatively snowy part of the continent. This provides enough detail for scientists to infer year-to-year temperature changes. The data show that the Antarctic climate is highly responsive to changes in the Pacific. For example, during a major El Niño event from 1939 to 1942, temperatures in West Antarctica rose by about 6 to 10 degrees F (3-6 degrees C), and then dropped by an estimated 9 to 13 degrees F (5-7 degrees C) over the next two years. El Niño is a periodic shift in air pressure accompanied by oceanic warming in the tropical Pacific.

Although the heart of El Niño's oceanic warming is in the tropical Pacific, it often fosters a circulation pattern that pushes relatively mild, moist air toward West Antarctica, where it can temporarily displace much colder air. As a result, West Antarctica has one of the world's most variable climates.


Now, let me again say this: I do not think that global warming or climate change will be the end of the world. This is not some apocalypse. This is going to be a problem for many species - plant and animal - because we are already fragmenting their habitats. Otherwise, they'd migrate with the changing environment. They did it many times during the Pleistocene warming and freezing cycles.
Posted by Will Baird at Tuesday, August 12, 2008