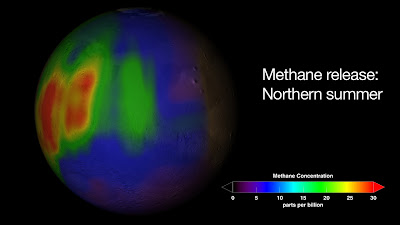 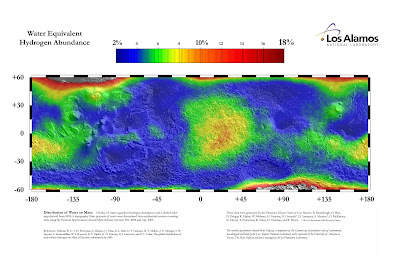 Now was that H2 detection from CH4 or H2O?

A team of NASA and university scientists has achieved the first definitive detection of methane in the atmosphere of Mars. This discovery indicates the planet is either biologically or geologically active.

The team found methane in the Martian atmosphere by carefully observing the planet throughout several Mars years with NASA's Infrared Telescope Facility and the W.M. Keck telescope, both at Mauna Kea, Hawaii. The team used spectrometers on the telescopes to spread the light into its component colors, as a prism separates white light into a rainbow. The team detected three spectral features called absorption lines that together are a definitive signature of methane.

"Methane is quickly destroyed in the Martian atmosphere in a variety of ways, so our discovery of substantial plumes of methane in the northern hemisphere of Mars in 2003 indicates some ongoing process is releasing the gas," said Michael Mumma of NASA's Goddard Space Flight Center in Greenbelt, Md. "At northern mid-summer, methane is released at a rate comparable to that of the massive hydrocarbon seep at Coal Oil Point in Santa Barbara, Calif." Mumma is lead author of a paper describing this research that will appear in Science Express on Thursday.

Methane, four atoms of hydrogen bound to a carbon atom, is the main component of natural gas on Earth. Astrobiologists are interested in these data because organisms release much of Earth's methane as they digest nutrients. However, other purely geological processes, like oxidation of iron, also release methane.

"Right now, we do not have enough information to tell whether biology or geology -- or both -- is producing the methane on Mars," Mumma said. "But it does tell us the planet is still alive, at least in a geologic sense. It is as if Mars is challenging us, saying, 'hey, find out what this means.' "

If microscopic Martian life is producing the methane, it likely resides far below the surface where it is warm enough for liquid water to exist. Liquid water is necessary for all known forms of life, as are energy sources and a supply of carbon.

"On Earth, microorganisms thrive about 1.2 to 1.9 miles beneath the Witwatersrand basin of South Africa, where natural radioactivity splits water molecules into molecular hydrogen and oxygen," Mumma said. "The organisms use the hydrogen for energy. It might be possible for similar organisms to survive for billions of years below the permafrost layer on Mars, where water is liquid, radiation supplies energy, and carbon dioxide provides carbon. Gases, like methane, accumulated in such underground zones might be released into the atmosphere if pores or fissures open during the warm seasons, connecting the deep zones to the atmosphere at crater walls or canyons."

It is possible a geologic process produced the Martian methane, either now or eons ago. On Earth, the conversion of iron oxide into the serpentine group of minerals creates methane, and on Mars this process could proceed using water, carbon dioxide and the planet's internal heat. Although there is no evidence of active volcanism on Mars today, ancient methane trapped in ice cages called clathrates might be released now.