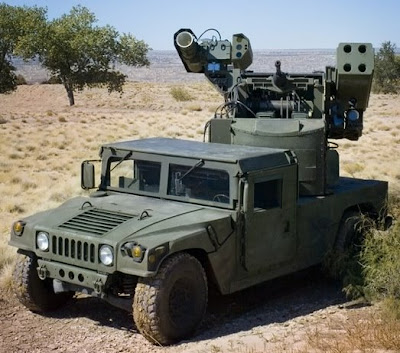 Last month, a small robotic plane flew into the skies over New Mexico's White Sands Missile Range. Tracking the drone was an experimental Humvee, equipped with a laser. The real-life ray gun then took aim at the drone, and began blasting. Soon, the drone had a hole burnt through it -- and was crashing down to the desert.

That laser is considerably less powerful than what is the traditional weapons grade laser has assumed to need. The key is kill speed. If it takes more than a certain amount of time, the laser isn't that useful. It would be interesting to see, and frankly vital for the Boeing project above, for the laser to be able to be installed in either existing combat vehicles (every Abrams, Bradley and Striker a beam jockey, man!) and to upgrade that kilowattage. If you can kill mortars with it and pair it with a low power laser spectrometer/lidar combo, you have a very interesting IED killer too.
Posted by Will Baird at Monday, January 26, 2009

Mmm...lasers and robots. I am LOVING THIS. Has somebody founded SkyNet yet? Because somebody should.

Heh. I used to joke quite a bit taht I gave up giant death rays for working on skynet. ;)

My previous job was at the facility they probably used for this test: HELSTF, the High Energy Laser System Test Facility at White Sands Missile Range.

Lasers, supercomputers and now, slowly, rockets. I want to live my sci-fi life, not just read about it! ;)