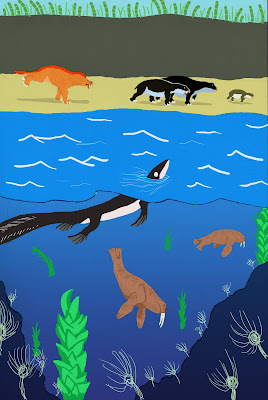 This is the world where life nearly died out over the course of tens of thousands of years because Mother Nature had a bad day 251 million years ago. This is a world that would seem terribly familiar, yet so twistedly wrong at the same time. This is not the age of mammals 186 million years early. This is something…different.

While not as ambitious as Spec-World, this is a project that three of us have embarked on. Zach of When Pigs Fly Returns, Scott of Coherent Light House, and I have been bandying around ideas for some time. We are not the only contributors to this endeavor. This was predated by a discussion that I participated in on the once mighty SHWI. Others put forward their own ideas then. However, there’s a significant difference between now and then: Zach and Scott can actually, y’know, draw. At this point, we’re ready to make the leap from bandying around to trotting out bits for display.

Over the next several months, we are hoping to parade a few different biomes, their inhabitants and their blatant strangeness across for your enjoyment, discussion, and, hopefully, critique.


The World That Would Never Be

Even though I wrote about it before, I had best do a run down as to what is happening and why. This is an alternate world, not ours. The world didn’t have the Permian Extinction as we know it happen. The Siberian Traps triggered the perfect storm that nearly undid multicellular life’s then 300 million year adventure and that never happened in this alternate world.

Rather, this time the fury of the Siberian Traps and its subsequent mass death is dissipated. The eruptions that took place over the course of a million years (+/-) are now spread over twenty million years, venting the energy and carbon dioxide over a manageable time frame for the ecology. Ten million years ought to be more than sufficient a period It is not to say that there won’t be a global warming. The world does warm. It does so over the course of ten million years and never comes close to the insane peak of the Great Dying of our timeline. The temperature of our alternate, extended Permian is a lot warmer than today: 7 C higher. Furthermore, the atmospheric oxygen does not drop to the lethal levels hat we saw during the PT Event either, nor quite to the hypothesized levels of the Mesozoic. The atmospheric oxygen “only” falls to 19%. There’s not a lot more world wide generalizations that can be made. However, in these posts we will outline and describe multiple locales.

The alternate Permian then stretches for a very long time from the end of the Carboniferous 300 million years ago to what would have been the start of the Jurassic 200 million years ago. At the end, there is a mass extinction, but it’s on the order of what happened in our Late Triassic Mass Exinctions. It isn’t pretty – the megafauna takes a hit, but “only” 50% of genera die off in the sea and 30% on land - but the horrific dying isn’t the 70% terrestrial and 90+% marine that was seen for the PT Event of our time line. That doesn’t enough the Paleozoic though. It chugs along until the Chixculub impact takes place another 135 million years in the future. Then we begin the Allozoic.

At least for now, we are going to concentrate on the extended Permian and a couple snapshots of what would have been the Triassic Period. We’ll keep the stratigraphy for now, but we may revise it later, if we make this into a full blown website or book. There are three locales that we are going to discuss. The first is the Ural Sea –official name always welcome, btw - that divides the rising Urals in the East from the rest of Pangaea in the west. We have some exciting animals and ecological discussions there: the focus though is on the littoral and beach ecologies. The star is the so-called Walrodont, but there are several other critters as well that will be detailed. The second locale is the Megavongo. This is in the heart of what would be North America and an environment that is both similar to and radically different from the Okivongo of Africa. There are no stars there, but there is an ensemble cast. The final locale is the tropical archipelago in the far eastern Tethys: the tropical islands that one day would be southern China. If we have time, we'll also hit other places, but that remains to be seen.

We are going to be starting with the Ural Sea. It's an environment somewhere between the north african Mediterranean coast and the red sea. However, with "trees" and wetter. We'll cover the environment more in the Ural Sea post itself. Had there been sentients at the time, the sphenopsids of the Ural Sea would have held the same iconic status as the cypresses of Lebanon.

Zach's first stab at using Photoshop had mixed results, but did highlight some of the critters of the XenoPermian at the Ural Sea's beach ecosystem. Pictured above are a very derived gorgonopsid chasing a family of sirenodonts, a hovasaur that is slowly becoming something not unlike a mosasaur, and our walrodonts (the very derived dicynodonts). Not pictured is our Neuparkeria (a beach comber), the procynosuchid pinnipeds, a pseudocrocodilian, some funky lobefin fish that do a grunion run, a desmodont (another very derived dicynodont), some basal pterosaurs, and a marine and uber derived Aïstopod.

PS Zach and I will need to collaborate in the phylogenic post of the aquatic dicynodonts, btw. They're not the only dicynodonts, but in the Ural Sea and its fringing ecology they are the single most important part of that group. And very, very interesting.

"The second locale is the Megavongo. This is in the heart of what would be North America and an environment that is both similar to and radically different from the Okivongo of Africa."

So...basically its where Petrified Forest National Park, the Post Quarry, and such is in our timeline.

Anyway, the project looks awesome. I cannot wait to see more. Personally, I'm having my fingers crossed for badass therocephalian being allosaur analogues, but do what you want to do. The project seems rather well thought out and good as well.

Just one problem. You say you have a really derived marine aistopod, but I think the aistopods died out in the Early Permian. And even then, I'm not sure if they were even that diverse. Though it would be interesting if they survive, since the are so snake-like.

So...basically its where Petrified Forest National Park, the Post Quarry, and such is in our timeline.And much, much more. The Megavongo is massive.

Anyway, the project looks awesome. I cannot wait to see more. Personally, I'm having my fingers crossed for badass therocephalian being allosaur analogues, but do what you want to do. The project seems rather well thought out and good as well.Well, we have something rather different for the therocephalians. Euchambersia is a founder of a very, very nasty clade.

You say you have a really derived marine aistopod, but I think the aistopods died out in the Early Permian. And even then, I'm not sure if they were even that diverse. Though it would be interesting if they survive, since the are so snake-like.We're declaring a ghost lineage that takes of life in brackish waters and only heads to freshwater for breeding. Eventually, they fully adapt to marine life, except for reproduction where they HAVE to come back to breed. Imagine a salmon run of snake-like tetrapods once per year, but some of them being larger than anacondas.

Fascinating stuff! Not many SpecEvolution projects with the Permian.