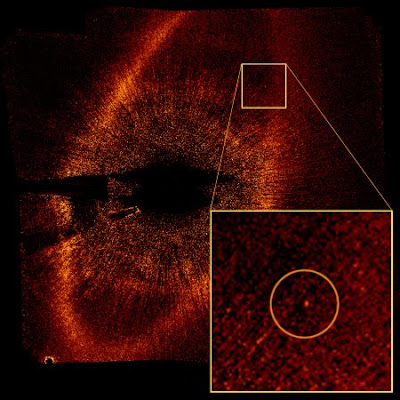 The planet discovered by Hubble is one of the smallest exoplanets found yet. It's somewhere between the size of Neptune and three times bigger than Jupiter. And it may have a Saturn-like ring.

It circles the star Fomalhaut, pronounced FUM-al-HUT, which is Arabic for "mouth of the fish." It's in the constellation Piscis Austrinus and is relatively close by — a mere 148 trillion miles away, practically a next-door neighbor by galactic standards. The planet's temperature is around 260 degrees, but that's cool by comparison to other exoplanets.

The planet is only about 200 million years old, a baby compared to the more than 4 billion-year-old planets in our solar system. That's important to astronomers because they can study what Earth and planets in our solar system may have been like in their infancy, said Paul Kalas at the University of California, Berkeley. Kalas led the team using Hubble to discover Fomalhaut's planet.

I just talked with someone working on the instruments of the terrestrial planet hunt. I should have bet ya, Mike, on this one too.

BTW, taht sucker formed at the time of the Triassic-Jurassic Boundary. Ponder THAT.

>BTW, taht sucker formed at the time of the Triassic-Jurassic Boundary. Ponder THAT.<