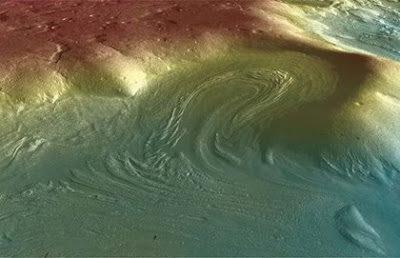 Because water is one of the primary requirements for life as we know it, finding large new reservoirs of frozen water on Mars is an encouraging sign for scientists searching for life beyond Earth.

The concealed glaciers extend for tens of miles from edges of mountains or cliffs and are up to one-half mile thick. A layer of rocky debris covering the ice may have preserved the glaciers as remnants from an ice sheet covering middle latitudes during a past ice age.

"Altogether, these glaciers almost certainly represent the largest reservoir of water ice on Mars that's not in the polar caps. Just one of the features we examined is three times larger than the city of Los Angeles, and up to one-half-mile thick, and there are many more," said John W. Holt of The University of Texas at Austin's Jackson School of Geosciences, lead author of a report on the radar observations in the Nov. 21 issue of the journal Science.

"In addition to their scientific value, they could be a source of water to support future exploration of Mars," said Holt.

The gently sloping aprons of material around taller features have puzzled scientists since NASA's Viking orbiters revealed them in the 1970s. One theory contended they were flows of rocky debris lubricated by a little ice. The features reminded Holt of massive ice glaciers detected under rocky coverings in Antarctica, where he has extensive experience using airborne geophysical instruments such as radar to study Antarctic ice sheets.

The Shallow Radar instrument on the Mars Reconnaissance Orbiter provided an answer to this Martian puzzle, indicating the features contain large amounts of ice.

"These results are the smoking gun pointing to the presence of large amounts of water ice at these latitudes," said Ali Safaeinili, a shallow-radar instrument team member with NASA's Jet Propulsion Laboratory in Pasadena, Calif.

The radar's evidence for water ice comes in multiple ways. The radar echoes received by the orbiter while passing over these features indicate that radio waves pass through the apron material and reflect off a deeper surface below without significant loss in strength, as expected if the aprons are thick ice under a relatively thin covering.

The radar does not detect reflections from the interior of these deposits as would occur if they contained significant rock debris. Finally, the apparent velocity of radio waves passing through the apron is consistent with a composition of water ice.

The buried glaciers reported by Holt and 11 co-authors lie in the Hellas Basin region of Mars' southern hemisphere. The radar has also detected similar-appearing aprons extending from cliffs in the northern hemisphere.