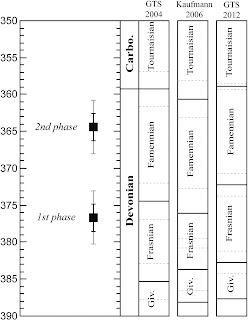 New 40Ar/39Ar and K-Ar ages of the Viluy traps (Eastern Siberia): Further evidence for a relationship with the Frasnian–Famennian mass extinction

We present here new ages, combining both K-Ar and 40Ar/39Ar techniques, reinforcing the possible link between the Viluy traps (eastern Siberia) with the Late–Devonian mass extinctions. The Viluy traps (also referred to as the Yakutsk large igneous province) are associated with the breakup of the eastern margin of the Siberian platform as a triple-junction rift system, with volcanic outcropping along the Lena, Markha and Viluy rivers and an initial volume of volcanic products of about one million cubic kilometers. K-Ar ages obtained on seven samples from the Viluy rift display values ranging from 366 ± 5 to 381 ± 5 Ma, with a mean age of 374 ± 5 Ma. Our new 40Ar/39Ar results display well-defined step-heating plateau ages ranging from 362.3 ± 3.4 to 379.7 ± 3.5 Ma. Although most K-Ar and 40Ar/39Ar ages agree within about 1% uncertainty, which reinforces the validity of the K-Ar ages obtained with the Cassignol and Gillot unspiked technique (even in the Paleozoic), a slightly clearer scenario appears when only the 40Ar/39Ar ages are considered. Effectively, they cluster in two different groups with weighted mean ages of 364.4 ± 1.7 and 376.7 ± 1.7 Ma. These ages support a multi-phases emplacement of the Viluy traps, as is the case for many continental flood basalts. Because the age of the first volcanic phase is undistinguishable from recent determinations of the age of the Frasnian–Famennian boundary, our results further strengthen the hypothesis of a causal relationship between the two events. The second phase of emplacement of the Viluy traps occurred at the end of the Devonian, apparently slightly before the Devonian–Carboniferous boundary. Finally, except for the Ordovician–Silurian extinction which remains to be associated with a volcanic province, all major Phanerozoic mass extinctions have been correlated with the emplacement of a CFB, thereby reinforcing the possible causal link between these events.

Timing is not everything, folks.  Extinction pattern studies are needed, too.

That said, if this holds up, supercontinents are BAD NEWS for life.
Posted by Will Baird at Tuesday, June 25, 2013