Mars Had a Great Oxidation Event of Its Own 4 Billion Years Ago, Before Earth 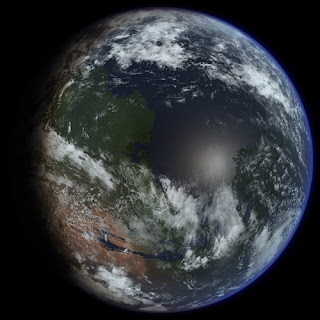 Differences between Martian meteorites and rocks examined by a NASA rover can be explained if Mars had an oxygen-rich atmosphere 4000 million years ago – well before the rise of atmospheric oxygen on Earth 2500m years ago.

Scientists from Oxford University investigated the compositions of Martian meteorites found on Earth and data from NASA's 'Spirit' rover that examined surface rocks in the Gusev crater on Mars. The fact that the surface rocks are five times richer in nickel than the meteorites was puzzling and had cast doubt on whether the meteorites are typical volcanic products of the red planet.

'What we have shown is that both meteorites and surface volcanic rocks are consistent with similar origins in the deep interior of Mars but that the surface rocks come from a more oxygen-rich environment, probably caused by recycling of oxygen-rich materials into the interior,' said Professor Bernard Wood, of Oxford University's Department of Earth Sciences, who led the research reported in this week's Nature.

Whilst it is possible that the geological composition of Mars varies immensely from region to region the researchers believe that it is more likely that the differences arise through a process known as subduction – in which material is recycled into the interior. They suggest that the Martian surface was oxidised very early in the history of the planet and that, through subduction, this oxygen-rich material was drawn into the shallow interior and recycled back to the surface during eruptions 4000 million years ago. The meteorites, by contrast, are much younger volcanic rocks that emerged from deeper within the planet and so were less influenced by this process.

Professor Wood said: 'The implication is that Mars had an oxygen-rich atmosphere at a time, about 4000 million years ago, well before the rise of atmospheric oxygen on earth around 2500 million years ago. As oxidation is what gives Mars its distinctive colour it is likely that the 'red planet' was wet, warm and rusty billions of years before Earth's atmosphere became oxygen rich.'

It also implies plate tectonics.
Posted by Will Baird at Wednesday, June 19, 2013