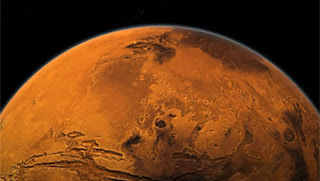 I linked to the paper and the posted a chunk of the press release which claimed Mars had a Great Oxygenation Event about 4 billion years ago on Wednesday.  I got a bunch of hits for it.  It seems I was one of the earliest rebloggers of this.  The purty pic didn't hurt, I am sure.  However, the idea itself was interesting...and got me thinking.

4 billion years ago was an interesting time.  For Mars, it was the so-called Noachian System[1]: between 4.1 to 3.8 billion years ago.  This is the wet time for Mars when water was prevalent on the surface.  This is the time frame which fossils of life are likely to be present.  It's also when the oxygen inclusive atmosphere was present.

Interestingly, its also when three of the BIGGEST impacts found (short of Thea, erm, with? on? Earth) took place.  The Hellas Basin is one of the most notable impact craters in the solar system.  So notable it was mapped very early when folks pointed telescopes at Mars.  Its 2300 km across.  There's a second, larger, but not as deep impact on Mars: the Utopia Basin, where one of the Viking landers set down.  For that matter, the Argyre Basin (another impact) also formed 3.9 billion years ago.  This one is 1,800 km across.  In contrast, Chicxulub, which did in the dinosaurs was /only/ 180 km across.

The dino-killer was nothing in comparison to these.

Life arose on Mars.  In fact, it was developing faster because the world was cooling faster. It even had a basic continental drift and life was 'accelerating' faster.  The GOE happens 1.6 billion years earlier and life /could/ have been headed to having a hypothesized Ediacarian Period at or around 3.3 billion years ago.   We might have had an intelligent Martian 2.8 billion years ago.  Except...

Mars gets hammered.  Hellas impact's energy alone would produce at least four orders of magnitude more energy than Chicxulub.  This scale of impact happened at least three times, one larger, one somewhat smaller in the time scale which complex life has been alive here on earth, plus or minus.

While killing microbial life is much, much harder than complex life.  I can all too well imagine something on the order of just one of these be very disruptive, if not devastating.  It might not have killed it off.  However, it might well have killed off photosynthetic, oxygen producing life.  And the chances of a Martian variant of a Gaian system arising.

So, first crazy thought of the day.

1.  A system is sometimes called analogous to a Period, like the Cretaceous.  However, the length of the Noachian is closer to a terrestrial Era, but that's neither here nor there.

A quick source (PDF) on mongo impacts on a simulated Mars is here.
Posted by Will Baird at Friday, June 21, 2013

I always think of Hellas as being equivalent to Australia -- it's around the same size (compared to the size of the planet), has a similar shape (east-west ovoid) and is in about the same location (centered around ~35 South latitude).

So, in very rough Earth terms, you want to think of an impact blasting out a crater the size of Australia. Three of those.

How many dead or dying worlds are there in the Solar System? Venus was resurfaced and hot wet greenhoused and Titan seems to look like a cold analog of a hot wet water greenhouse world.

Venus got heated to death.

Titan is doing the methane equivalent of the "hot" wet greenhouse. We think. I have a feeling mama nature has an interesting surprise there.


For those coming in later, the see the Leaky Earth post/link here as to why the Mars might have developed life sooner:

(hint: Mars cools faster than earth since its considerably smaller)