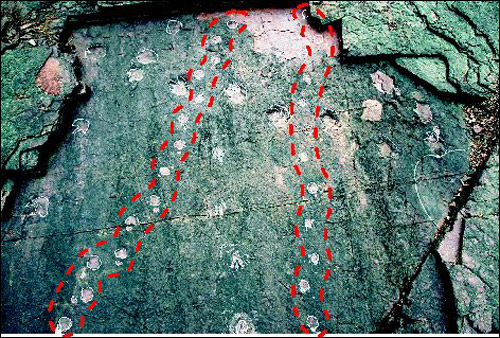 How adorable! A shame they don't have a scale for that picture, although I'm sure I could work it out for myself.

The article in the title link says 4.2m.

Yup, I read that. But the photo doesn't seem to be the whole lot. I suppose at least I have the right order of magnitude with that measurement though!

So, query, does the above have adult sauropod tracks that are moving along with the baby ones?

The prints going almost at right angles to the two babies look rather adult-sauropod-like, but there's one that seems to have very pronounced toes.

The print towards the left hand side, under the orange patch is definitely a biped of some persuasion. I don't know enough about the fauna to hazard a guess at what though.

I was wondering if the trackway to the upper left was running parallel to the mini'pods. Just curious what social behavior can be inferred from the trackways since that's one of the few snapshots we have of dinosaurian behavior we have.

The parallel one is the three-toed one, by the looks of things. There are loads of different possible explanations:

The problem is that we don't know when the tracks were deposited. We can usually say "Well set A was deposited before set B because there's some overlap and we can see set B was laid over set A", but that doesn't tell us how much later set B was made. Could have been five minutes, could have been two weeks.

Does that make sense?

It's certainly fascinating to see a number of organisms moving in the same direction. There are just so many interpretations of this.

I would like to find a way to draw from this some support for the notion of sauropod coprophagous nurture. I can't see how, yet.