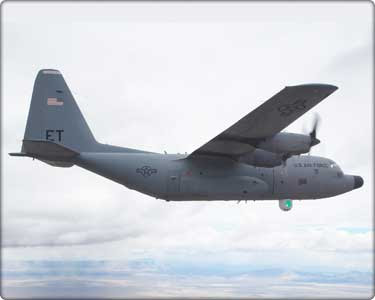 The Advanced Tactical Laser (ATL) is a weapons class chemical laser, COIL (iirc), that the special operations command has contracted with Boeing to develop. The idea is that the laser gunship will be able to engage targets without collateral damage since the energy is overwhelmingly pumped all into the target. Boeing announced that they have successfully test fired the integrated platform, a C-130, at Kirtland Air Force Base in Albuquerque. This isn't an in-flight test yet, but that shouldn't be too much of a problem.

However, I want to make sure that there's something understood. The wikipedia entry states that the ATL is a megwatt class laser. This may not be true. In fact, it's doubtful. Traditionally, a weapon's grade laser is 100 kilowatts. Scaling lasers, especially ones like chemical lasers that consume fuel, is not a linear problem by any means and if you can save weight and improve firing times, why use a bigger laser than necessary?

Note: mass deployment of chemical lasers is highly unlikely. In the case of COILs, if the laser apparatus is damaged you end up with dry cleaned lungs. In the case of D-F lasers like the THEL, you get flourine fires. Those are nasty, nasty, nasty. Anyone that wants a D-F laser laying around on a battlefield is of questionable sanity, IMAAO.
Posted by Will Baird at Tuesday, May 20, 2008