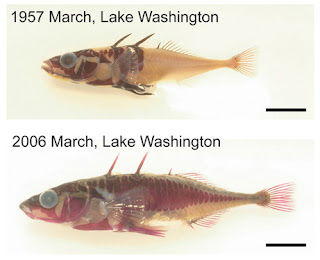 When a historic cleanup helped clear the waters of a polluted lake near Seattle, a population of tiny, spiny fish called sticklebacks may have "evolved in reverse" to survive.

Then an unprecedented U.S.-$140-million cleanup in the mid-1960s transformed the lake into the pristine boaters' paradise that it is today.

But the lake's recovery put at least one species in a pickle: the three-spine stickleback.

The small fish, formerly hidden in the murky depths, found itself swimming in plain view of predators like cutthroat trout.

Researchers now think the threat of predators spurred the fish into rapid evolution toward an older version of itself, evolutionarily speaking.

Today's Lake Washington sticklebacks are a throwback to their ancestors, which grew armored plates as a defense, according to Katie Peichel, a biologist at the Fred Hutchinson Cancer Research Center in Seattle.

"We call it 'reverse evolution' because the sticklebacks are reverting to an ancestral phenotype [or appearance], that of the marine sticklebacks, which originally founded the lake populations," she said.

Peichel is co-author of a new study on the sticklebacks that appears in the May 20 issue of the journal Current Biology.

hmmm. Any bo types that want to take a look at the paper? That just seems like a very poor choice of words to me.
Posted by Will Baird at Tuesday, May 20, 2008