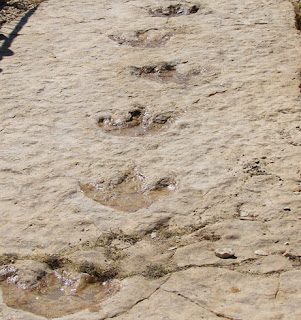 More than a hundred dinosaur footprints have been found on the Arabian Peninsula, the first time that tracks have been unearthed in the region, a new study says.

The 150-million-year-old tracks were made by ornithopods and sauropods—large two- and four-legged plant-eaters, respectively—in modern-day Yemen.

"The first day in the field we had a herd of eleven sauropods and over a hundred prints," said lead author Anne Schulp, a paleontologist at the Natuurhistorisch Museum Maastricht in the Netherlands.

"It's providing the first data point, at least in terms of trackways from this part of the world," she said.

The tracks were first discovered by Mohammed Al-Daheri, a Yemeni journalist, about 31 miles (50 kilometers) north of Yemen's capital, Şan'ā'. (See a Yemen map.)

The footprints are a good example of herding behavior along a coastal mudflat in the late Jurassic period, which lasted from about 200 million to 150 million years ago, experts say.

The paleontologists were also able to infer the size, age, and speed of the sauropods based on their prints.

"We've got young dinosaurs and old ones—[or] at least small ones and big ones—in the same herd," Schulp said.

"The nice thing is they're all traveling together at the same speed"—something like a leisurely stroll, he added.

"Tracks are a sort of snapshot—almost like a movie of a living animal—whereas bones tell you about the dead ones," Lockley said.

The find may also "spark some ecological debate," Lockley said, since "there's conventional wisdom that the two types of herbivorous dinosaurs—the ornithopods and sauropods—do not commonly co-occur or co-exist together," he said.

There's also a theropod trackway in there too that they don't mention, but took a photograph of for NatGeo. Coherding orinthopods and sauropods? OoOooOOoooo!
Posted by Will Baird at Wednesday, May 21, 2008