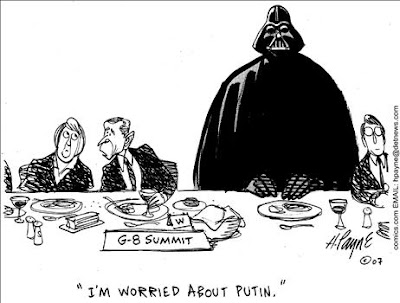 I am awaiting a callback since my last meeting was so amazingly short and can't get myself into too much trouble. Therefore, I felt like I needed to get myself into mischief with posting about Russia! I mean, its been a while since I've written anything about the Russosphere because of the events going on right now in the mischief arena, sooo...

Russia has been making itself into a serious problem. Besides playing games in the gas war, reasserting itself in the near abroad, interjecting itself in the problems with Iran in a most unhelpful manner, and making overtly threatening flights of its nuclear, if admittedly decrepit, bomber force, it is now not just talking about being expansionist with respect to the other formerly USSR republics, its actually making moves to annex at least parts of them. Russia had been making some threats over the various so-called "Frozen Conflicts" in the xUSSR if the West helped Kosovo declare independence. Namely, that they would annex certain chunks: the errant sections of Moldova and Georgia were the primary areas discussed. Additionally, when the Orange Revolution toppled Yanukovich from stealing the election in Ukraine, the eastern, southern, and Crimean parts of Ukraine were mentioned by Russia as parts that would possibly be annexed. For a long time all of this was toothless talk. After all, Kosovo received Taiwanese status: independent and recognized by some, but not all and without a UN seat. When this happened, Russia didn't do anything other than huff and puff. It looked as though Russia's comments that Kosovo would be a pattern to be followed in the "Frozen Conflicts" was just another case of the Russian Bear blowing hot air. However, that seems to have changing. Big time.

The most worrisome from the point of view of the West so far has been Georgia. A few weeks ago Georgia had a drone shot down by a Russian MiG:

The whole thing was rather surprising. When confronted, the Russians stated that it didn't happen, despite the video, and then as seems to be modus operandi for the Russians made several statements that were rather conflicting. First that the West must have staged it. Then that the Abkhazians did it with a SAM. Meanwhile, the Georgians released the tracking data for the MiG...and it flew off into Russian airspace. If that were not troubling enough, the Abkhazians have claimed since then that they have downed two more drones, which the Georgians, interestingly enough, deny.

Probably using this as a pretext, the Russians are now moving thousands more troops into Abkhazia. They have claimed that the Georgians have been massing troops on the intra-Georgian border. Georgia has denied doing so and the UN Observers have backed their claims that only local residents are present. As if that were not enough, Putin signed accords that allowed Russian government ministries to begin operations on Abkhazian soil in a manner that is eerily reminiscent of how they operate in Russia proper. It has already granted Russian passports. When taken all together, along with Russian words, the whole situation smacks of creeping Russian revanchism.

During the Orange Revolution, some Russian politicians were in Ukraine in support of the Yanukovich elements and even in joint statements with the pissy losers stated that the sections of Ukraine that were in support of Yanukovich would secede to be annexed by Russia. It didn't happen and since then Yanukovich ahs shown that he has been and will be more interested in his own power (and possibly pocket book) than truly being a member of the Greater Panrussia. That hasn't stopped the Russian politicians - some of the same and now others that are new, including Putin's circle - from bringing returning to the theme. Especially quite recently over Crimea specifically.

While there might be a cellophane sheet - or would that be a filo sheet? - of pretext for the situation in the breakaway regions of Georgia, there's even less for the table pounding that Russia has been making with respect to Ukraine. There is a nasty little row over Crimea now underway. Important politicians of Russia are now stating the Crimean is 'question' that needs 'resolving' even though there has been multiple treaties over the matter stating the Crimea is an integral part of Ukraine. Putin too has gotten into the act by questioning whether or not Ukraine ought to be a acknowledged as an independent country or at least whether or not it ought to be guaranteed its territorial integrity. While there hasn't been any official action, ie its all been talk, if Russia is moving from talk to action with Georgia, could Ukraine be next?

This is especially worrisome because in both cases Georgia and Ukraine are moving towards NATO membership. They were denied a MAP at the last NATO Summit, yet were promised - perhaps vacuously - that they were going to start down the path of membership very soon. Once they are members any territorial adjustment wrt Russia will be nigh impossible to Russia's advantage since an attack on one member is an attack on all. Therefore, Russia might have decided to make its move now during a window of opportunity that has arisen because of France and Germany's objections to Ukrainian and Georgian membership.

The problem is that the Europeans are making the situation worse. While they are telling Russia not to escalate, Russian forces continue to march. They keep telling the Georgians to cool off too...yet there was never anything that the Georgians could really do: they completely lack the firepower to roust the Russian from their territory. Besides, it's hardly the Georgians that are aggravating the situation either! The one real bit that Europe can do to help Georgia - or Ukraine! - seems to be something they are not willing at this point as whole to do: grant NATO membership. Alas.
Posted by Will Baird at Wednesday, May 14, 2008

What the heck, Russia?

I just don't get Russia's (Putin's) motivations. Are they making a big scene, screaming "We're a superpower TOO," or are they just fearmongering? Or both?

I think he thinks that the break up of the USSR was a terrible mistake that he's trying to remedy. In his own special way.

Georgia I can certainly see. Would he really go after Ukraine? My impression was that separatism was effectively limited to Crimea and that the rest of the country was basically behind a Ukrainian identity.

Most of Ukraine, even Crimea, has a 'Ukrainian' identity. Then again, what about Austrians in 1938?

Austrians tended to identify themselves as a subset of Germans, not as a people closely related to the Germans. That last change took the Second World War to make it look good.

Ukrainians responded to the collapse of the Soviet Union by allowing if not helping a Ukrainian nation-state come about. Austrians--German-speakers in Cislethenia generally, including in Bohemia-Moravia--responded by creating a state with the explicit intent of federating with Germany.

I may be misinformed, but I can only imagine Russia expanding at Ukraine's expense in the context of some kind of armed conflict. Georgia's different, inasmuch as the secessionist bits seem to want to be quite Russian.

However, the Ukrainians mostly see themselves as a 'brother' ethnicity to Russians. Not Malorus - little russians - but specific subset of Slavs that are very, very close to Russian.

Done right - which I don't think that the Russians could do at this point, but I could be wrong - a Panslavism would work. At least in the Eastern, Southern, and Crimean areas.