Ukraine may be Having a Revolution 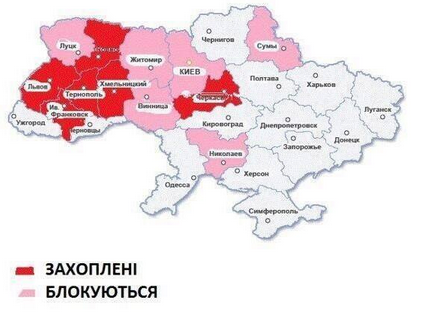 This is from the Euromaidan twitter feed.  The picture is entitled: regions in alliance with the opposition.  They had an earlier picture like this which stated the red were places the government offices had been taken over by the opposition and the light red was where the offices were under seige by the opposition.  There are bits which are coming out of the feeds which seem to be accurate: you can even watch the confrontations.  However, there seems to be a lot of ... overstatement and perhaps even propaganda: if snipers were working the crowd, then, um, I'd expect a lot more dead and the battle on Grushevskogo in Kyiv seemed to have a single watercannon being used last night when I was watching.  Perhaps the gov embezzled all the funds for it?

As of right now, Klitschko et al are requesting the cease fire be continued.  Yanukovich isn't giving any ground.

However, if the opposition, or at least protestors, are taking over the government buildings in the regions, its almost assured that Yanukovich will have to react.  Most likely he'll react with an iron first.  The question then is whether or not this will be like when Yeltsin climbed on the tank during the hardliner coup in the Soviet Union?  Or will it be like Tienanmen Square?  If Crimea, Odessa or Donetsk were to fall to the protestors, then I'd say Yanukovich is just plain toast.  If not, he has a base of support.

Drawing a parallel with Yeltsin's stunt brings to mind an unlikely, but possible outcome: the Soviet Union dissolved then.  Might we see East and South Ukraine divorce the West?

So, is Ukraine in the process of a revolution?  An Euromaidan Revolution?

Here's also an interesting take from the Business Insider.
Posted by Will Baird at Thursday, January 23, 2014