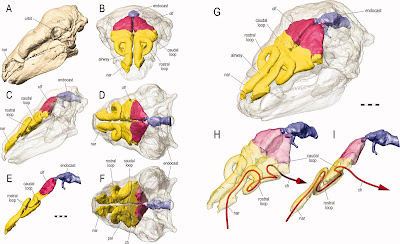 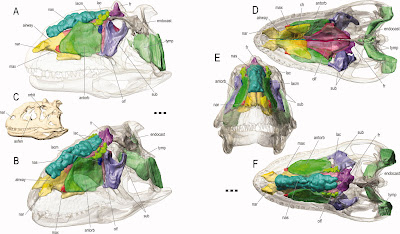 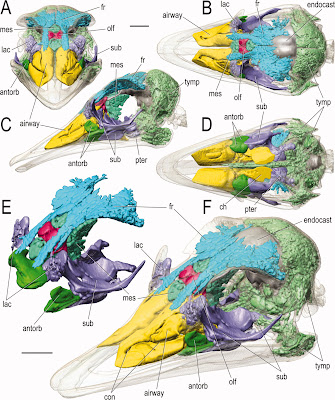 The Paranasal Air Sinuses of Predatory and Armored Dinosaurs (Archosauria: Theropoda and Ankylosauria) and Their Contribution to Cephalic Structure

Abstract
The paranasal air sinuses and nasal cavities were studied along with other cephalic spaces (brain cavity, paratympanic sinuses) in certain dinosaurs via CT scanning and 3D visualization to document the anatomy and examine the contribution of the sinuses to the morphological organization of the head as a whole. Two representatives each of two dinosaur clades are compared: the theropod saurischians Majungasaurus and Tyrannosaurus and the ankylosaurian ornithischians Panoplosaurus and Euoplocephalus. Their extant archosaurian outgroups, birds and crocodilians (exemplified by ostrich and alligator), display a diversity of paranasal sinuses, yet they share only a single homologous antorbital sinus, which in birds has an important subsidiary diverticulum, the suborbital sinus. Both of the theropods had a large antorbital sinus that pneumatized many of the facial and palatal bones as well as a birdlike suborbital sinus. Given that the suborbital sinus interleaves with jaw muscles, the paranasal sinuses of at least some theropods (including birds) were actively ventilated rather than being dead-air spaces. Although many ankylosaurians have been thought to have had extensive paranasal sinuses, most of the snout is instead (and surprisingly) often occupied by a highly convoluted airway. Digital segmentation, coupled with 3D visualization and analysis, allows the positions of the sinuses to be viewed in place within both the skull and the head and then measured volumetrically. These quantitative data allow the first reliable estimates of dinosaur head mass and an assessment of the potential savings in mass afforded by the sinuses.

So far the above only occurs in endotherms...in part also for heat exchange. hmmmm...

Couldn't resist the pix. There are more with the paper!

Nat Geo has a page too. So does Paleoblog.
Posted by Will Baird at Friday, December 12, 2008