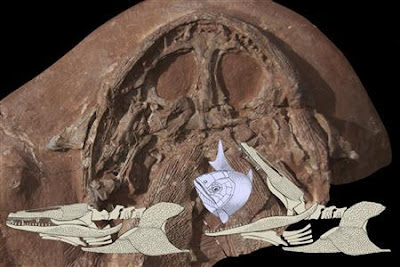 A peculiar amphibian that was clad in bony armor prowled warm lakes 210 million years ago, catching fish and other tasty snacks with one of the most unusual bites in the history of life on Earth.

The creature called Gerrothorax pulcherrimus, which lived alongside some of the early dinosaurs, opened its mouth not by dropping its lower jaw, as other vertebrate animals do.

Instead, it lifted back the top of its head in a way that looked a lot like lifting the lid of a toilet seat.

"It's weird. It's the ugliest animal in the world," Harvard University's Farish Jenkins, one of the scientists who describe the mechanics of its bite in the Journal of Vertebrate Paleontology, said in a telephone interview on Friday.

"You almost can't imagine holding your jaws still and lifting your head back to take a bite," Jenkins said.

"There are some vertebrates that will lift their heads slightly or the upper jaws (when they bite). Some salamanders do it slightly. Some fish do it slightly. But no animal is known to have done it this extensively," Jenkins added.

The scientists think Gerrothorax lurked at the bottom of a lake, then with a sudden movement of the skull created a mouth gape that entrapped any fish unfortunate enough to swim by.

Its jaws were lined with sharp teeth. And the roof of its mouth was studded with large fangs to keep any slippery fish from escaping its chomp.

With a special adaptation of the joint between its skull and first neck vertebra, Gerrothorax could raise its head relative to its lower jaw by as much as 50 degrees, giving it the wide gape necessary to swallow its prey.

Gerrothorax is one of a group of odd amphibians called plagiosaurs with no modern descendants that vanished along with numerous other species 200 million years ago in a mass extinction at the end of the Triassic Period. Its fossils were found in the Fleming Fjord Formation of east Greenland.

kewl. Someone hinged them wrong in their tetrapod improvement project.
Posted by Will Baird at Friday, December 12, 2008

So whose little Latin joke was it to name this thing "the most beautiful"?