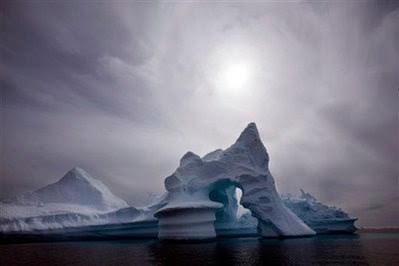 he common wisdom is that the invention of the steam engine and the advent of the coal-fueled industrial age marked the beginning of human influence on global climate.

But gathering physical evidence, backed by powerful simulations on the world's most advanced computer climate models, is reshaping that view and lending strong support to the radical idea that human-induced climate change began not 200 years ago, but thousands of years ago with the onset of large-scale agriculture in Asia and extensive deforestation in Europe.

What's more, according to the same computer simulations, the cumulative effect of thousands of years of human influence on climate is preventing the world from entering a new glacial age, altering a clockwork rhythm of periodic cooling of the planet that extends back more than a million years.

"This challenges the paradigm that things began changing with the Industrial Revolution," says Stephen Vavrus, a climatologist at the University of Wisconsin-Madison's Center for Climatic Research and the Nelson Institute for Environmental Studies. "If you think about even a small rate of increase over a long period of time, it becomes important."

Addressing scientists here today (Dec. 17) at a meeting of the American Geophysical Union, Vavrus and colleagues John Kutzbach and Gwenaëlle Philippon provided detailed evidence in support of a controversial idea first put forward by climatologist William F. Ruddiman of the University of Virginia. That idea, debated for the past several years by climate scientists, holds that the introduction of large-scale rice agriculture in Asia, coupled with extensive deforestation in Europe began to alter world climate by pumping significant amounts of greenhouse gases — methane from terraced rice paddies and carbon dioxide from burning forests — into the atmosphere. In turn, a warmer atmosphere heated the oceans making them much less efficient storehouses of carbon dioxide and reinforcing global warming.

That one-two punch, say Kutzbach and Vavrus, was enough to set human-induced climate change in motion.

"No one disputes the large rate of increase in greenhouse gases with the Industrial Revolution," Kutzbach notes. "The large-scale burning of coal for industry has swamped everything else" in the record.

But looking farther back in time, using climatic archives such as 850,000-year-old ice core records from Antarctica, scientists are teasing out evidence of past greenhouse gases in the form of fossil air trapped in the ice. That ancient air, say Vavrus and Kutzbach, contains the unmistakable signature of increased levels of atmospheric methane and carbon dioxide beginning thousands of years before the industrial age.

"Between 5,000 and 8,000 years ago, both methane and carbon dioxide started an upward trend, unlike during previous interglacial periods," explains Kutzbach. Indeed, Ruddiman has shown that during the latter stages of six previous interglacials, greenhouse gases trended downward, not upward. Thus, the accumulation of greenhouse gases over the past few thousands of years, the Wisconsin-Virginia team argue, is very likely forestalling the onset of a new glacial cycle, such as have occurred at regular 100,000-year intervals during the last million years. Each glacial period has been paced by regular and predictable changes in the orbit of the Earth known as Milankovitch cycles, a mechanism thought to kick start glacial cycles.

"We're at a very favorable state right now for increased glaciation," says Kutzbach. "Nature is favoring it at this time in orbital cycles, and if humans weren't in the picture it would probably be happening today."

Deforestation of Europe and large scale rice production saved us!

it's interesting that we ought to be going into a glacial cycle if these guys are right and also fits with past studies that we were headed that way too.
Posted by Will Baird at Wednesday, December 17, 2008

that AGU convention must be something.