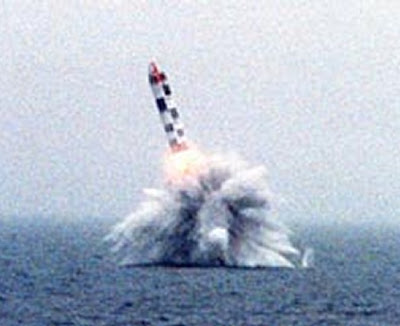 Russia's new sea-based ballistic missile has failed in a test launch for the fifth time, signaling serious trouble with the highly advertised key future component of the nation's nuclear forces.

The Bulava "self-destructed and exploded in the air" after a launch from the Dmitry Donskoy nuclear submarine beneath surface of the White Sea, said Navy spokesman Capt. Igor Dygalo.

Russia has been making an aggressive effort in recent years to upgrade its missile forces after years of post-Soviet underfunding and a lack of testing.

The Kremlin has hailed the missile as capable of penetrating any prospective missile defenses.

Washington's plan to deploy a ballistic missile defense system in Eastern Europe has sparked increasingly belligerent comments from the Kremlin and the Russian military, who say it will undermine the nation's security.

The Bulava is reportedly designed to have a maximum range of about 6,200 miles (10,000 kilometers) and carry six individually targeted nuclear warheads. It is expected to equip three new Borei-class nuclear submarines that are under construction.

Russian news agencies said that Tuesday's test was the fifth failure out of 10 launches since 2004. During the last successful test in late November it hit test targets on the Kamchatka Peninsula, some 4,000 miles (5,500 kilometers) to the east of the launch site in less than 15 minutes after the launch.

All tech has teething problems. Whether or not the Russians can overcome this one. Well, I have my opinions.
Posted by Will Baird at Tuesday, December 23, 2008