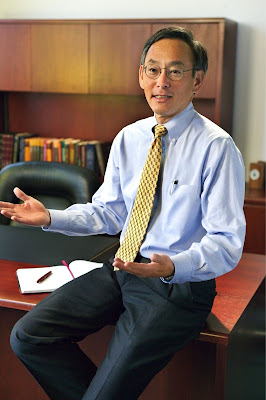 Life's been a mess here due tot he fact that Lyuda's PT has been in the fscking shop for the last week. The shop, the dealer really, has blown multiple turbochargers. I'm about to go rain down hell upon them in person, but while I have been so preoccupied with my personal problems, they slipped a fast one past me.

President-Elect Obama has selected my boss' boss' boss, Steve Chu, to be the Secretary of Energy. Because the Director's Page is likely to be updated with a replacement in the not too distant future, here's a small grab of his bio there:

Chu’s own research has resulted in numerous awards, including the 1997 Nobel Prize in Physics, shared with Claude Cohen-Tannoudji and William D. Phillips, for developing methods to cool and trap atoms with laser light. He did the work that led to the prize while at AT&T Bell Laboratories, from 1978-87; in 1987 he joined Stanford University as a professor in the Physics and Applied Physics Departments and was a highly decorated scientist, teacher, and administrator there until he accepted the directorship of Berkeley Lab.

Chu has published more than 220 scientific papers and is a fellow or member of the world’s leading scientific academies. He serves on numerous boards including the Hewlett Foundation, the University of Rochester, and the Executive Committee of the National Academies’ Board on Physics and Astronomy. He has been an advisor to the directors of the National Institutes of Health and the National Nuclear Security Agency.

His undergraduate degrees in physics and mathematics were from the University of Rochester and his Ph.D from UC Berkeley. He has been awarded ten honorary degrees and has held numerous visiting lectureships at universities including Harvard, Cambridge, Oxford, and the Collège de France.

Chu was born in Saint Louis, Missouri on February 2, 1948. He is married to Jean Chu, who was trained as a physicist at Oxford University and was formerly Stanford’s Dean of Admissions and the university president’s chief of staff. He has two grown sons, Geoffrey and Michael.

Oh, if the scuttlebutt is true, his siblings consider him a slacker, relatively speaking, since even though he has a PhD and a Nobel and run a lab and now is going to be a dept head of a nontrivial part of the government, he only has a single PhD. IDK if there's truth to that or not, but still an amusing rumor.

For the rest of you, he's huge into renewable energy, expect that for a major agenda item, and also synthetic biology, so look for that to be added more to the DOE's platform. Oh and he's not been a fan at all to what has been done to LANL and LLNL for management contracts. There's a slight ray of hope there, but only a slight one.

On a personal note, I've met him a few times. A very nice guy and very bright. PHD-itis is not something that has afflicted him.