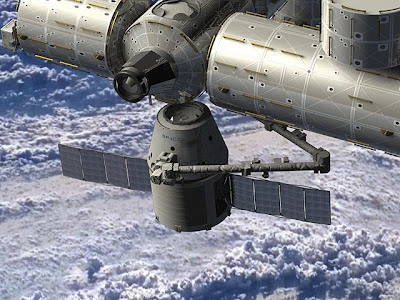 NASA made a 1.9-billion-dollar order for eight launches to the OSC and contracted 12 flights to SpaceX for 1.6 billion dollars, said Bill Gerstenmaier, NASA associate Administrator for Space Operations.

The first SpaceX launch is scheduled for December 2010, and the first OSC launch is set to take place in October 2011.

NASA today announced its selection of the SpaceX Falcon 9 launch vehicle and Dragon spacecraft for the International Space Station (ISS) Cargo Resupply Services (CRS) contract award. The contract is for a guaranteed minimum of 20,000 kg to be carried to the International Space Station. The firm contracted value is $1.6 billion and NASA may elect to order additional missions for a cumulative total contract value of up to $3.1 billion.

“The SpaceX team is honored to have been selected by NASA as the winner of the Cargo Resupply Services contract,” said Elon Musk, CEO and CTO, SpaceX. “This is a tremendous responsibility, given the swiftly approaching retirement of the Space Shuttle and the significant future needs of the Space Station. This also demonstrates the success of the NASA COTS program, which has opened a new era for NASA in US Commercial spaceflight.”

Under the CRS contract, SpaceX will deliver pressurized and unpressurized cargo to the ISS, and return cargo back to Earth. Cargo may include both NASA and NASA-sponsored payloads requiring a pressurized or unpressurized environment. SpaceX will provide the necessary services, test hardware and software, and mission-specific elements to integrate cargo with the Dragon delivery capsule.

Most impressive.
Posted by Will Baird at Tuesday, December 23, 2008

dragon! email me at jakenannasmom@hotmail.com There is an auggie group on facebook and myspace. lol. some of the people use it to keep in touch. and yep. brian and i have 3 kids now...and been together 10 years. crazy huh?