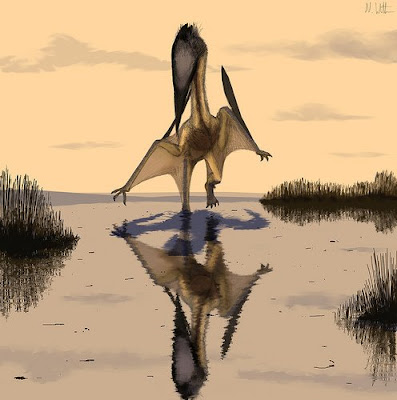 A fossil of a toothless flying pterosaur, with a body bigger than some family cars, represents the largest of these extinct reptiles ever to be found and has forced the creation of a new genus, scientists announced today.

Pterosaurs ruled the skies 115 million years ago during the dinosaur age. They are often mistaken for dinosaurs.

Mark Witton of the University of Portsmouth identified the creature from a partial skull fossil. Witton estimates the beast would have had a 5.5-yard (5-meter) wingspan. It stood more than a yard (about 1 meter) tall at the shoulder.

"Some of the previous examples we have from this family in China are just 60 centimeters [about two feet] long - as big as the skull of the new species. Put simply, it dwarfs any chaoyangopterid we've seen before by miles," Witton said.

The finding also is significant because it originated in Brazil and is the only example of the Chaoyangopteridae, a group of toothless pterosaurs, to be found outside China.

Witton has christened the new species Lacusovagus, meaning "lake wanderer," after the large body of water in which the remains were buried. The findings are detailed in the November issue of the journal Palaeontology.

Here's Mark's post on the subject. A very kewl Aptian pterosaur there.
Posted by Will Baird at Thursday, December 04, 2008