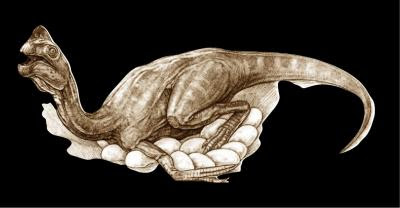 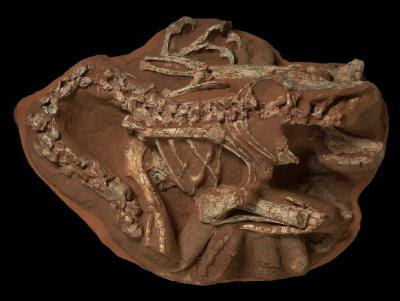 Sure, they're polygamous, but male emus and several other ground-dwelling birds also are devoted dads, serving as the sole incubators and caregivers to oversized broods from multiple mothers. It is rare behavior, but research described in the Dec. 19 Science found that it runs in this avian family, all the way back to its dinosaur ancestors.

Scientists had long wondered about the origins of polygamy and paternal care patterns among modern-day Paleognathes -- an ancient avian lineage that branched off soon after birds evolved from dinosaurs and includes ostriches, emus and tinamous. No such reproductive behavior exists among the vast majority of other vertebrates. Males contribute to parental care in less than 5 percent of mammal and non-avian reptile species, and while more than 90 percent of bird species co-parent to some degree, it is only among the Paleognathes that both polygamy and paternal care rule.

Now, in a groundbreaking paper ("Avian Paternal Care Had Dinosaur Origin"), paleobiologist Gregory M. Erickson of The Florida State University and researchers from three other institutions connect the evolutionary dots linking the polygamous, paternal reproductive patterns of extant (living) birds to the behavior of their extinct dinosaur kin.

"In those cases where adult dinosaurs have been found on top of nests, we found that the volume or mass of the egg clutch (total number of eggs in the nest) is very large relative to the size of the nesting animals," Erickson said. "This suggests multiple females contributed the eggs and the male guarded them. Notably, the ratio of egg volumes to the nesting animal's size is consistent with those in living birds where the male is the sole or primary nest attendant."

The researchers now had their link from the theropod dinosaurs (omnivores and carnivores that walked on two hind legs with bird-like feet) to the polygamy and nesting scenarios exhibited by their avian descendants, according to David Varricchio of Montana State, the study's principal investigator.

But to test the theory, Varricchio needed to determine the sex of the brooding dinosaurs whose bones have been found atop those communal nests.

For that, he turned to Erickson at Florida State, a renowned expert in dinosaur paleobiology.

The key was what he didn't find in the bones: They showed no signs whatsoever of the maternal and reproductively associated microscopic features common to living non-Paleognath bird groups, extinct non-avian dinosaurs or living reptiles.

"I found no evidence of medullary bone (the extra bone laid down by breeding female birds and dinosaurs to make eggs) or extensive bone resorbtion (the means by which female reptiles such as crocodiles acquire mineral salts to make eggs)," Erickson said. "This is consistent with the brooding dinosaurs being males."

Thus, the researchers had confirmation that the dinosaurs found in nests with large egg clutches were polygamistic males and the source of the peculiar avian behavior.

Moreover, those brooding dinosaurs were fathers -- and today's emus, rheas and tinamous owe their paternal care model to them.

What does this do to the theropods as monitor lizards for behavior, Zach?
Posted by Will Baird at Thursday, December 18, 2008

I don't see why it has to change. Vultures attack a corpse en masse in much the same way varanids do. Vultures aren't cooperating or "pack-hunting." They're opportunistic, grabbing chunks of meat and taking off. They often get in scuffles with each other, although vultures don't get into violent fights like varanids do.

Looks like an awesome paper, though. I'll have to beg people for it. :-)