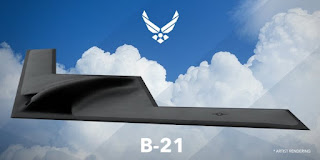 Meet the B-21.  This is the first official rendering of the new bomber.  No word when they will release other images or unveil a prototype.  IMO, they really ought to have named it the B-3. The obsession with the '21st century' is sooooo 90s.  ;)

Senator McCain is very unhappy with the prospect of the first LRSB contract being a cost plus contract rather than a fixed price. Note: the production contact is a fixed price, but the development contract is cost plus.

At the unveiling, the air force replied to McCain as well.

In general, despite McCain's anger, Congress is supportive of the nuclear triad revamp.  Maybe, just maybe, we have something so important they'll stop being stupid. The B-21 is amongst those programs.

Here's some more background info on contracting something like the B-21.

It also seems the air force brass is stating one of the older bomber types will have to be retired (B-1 or B-52) when the LRS-B comes online.

Minor Update:  The Air Force brass will be asking to raise the number of bombers planned from 100 to 175, maybe, 200.

Minor Update: Boeing and Lockheed have signaled they will not be suing (and again) over the B-21 contract.

DARPA is looking at funding a VTOL X Plane.  Some sources are stating this is the second coming of VARIOUS.

The US Air Force is looking at new missiles for the 6th gen, including SACM.

However, Australia is now considering other platforms than the F-35 (paywall) for the 2030s time frame for its strike capabilities.

The Dutch F-35s will be flying to the Netherlands soon.

More sources have started calling the PAK-FA a '5th gen fighter in name only.'

The X-2 gets a quick profiling ahead of its maiden flight.

The J-18 VSTOL fighter, the equivalent of the F-35B, is something of a will o'wisp.  Reported here.  Reported there.  Rumored periodically.  Never with any real substance.  However, it is clear the Chinese want one, whether or not they have even a prototype now.
Posted by Will Baird at Friday, February 26, 2016