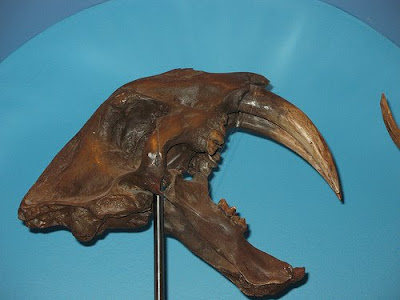 In a new study published in the online-open access journal PLoS ONE, Per Christiansen at the Zoological Museum in Copenhagen, Denmark, reports the finding that the evolution of skull and mandible shape in sabercats and modern cats were governed by different selective forces, and the two groups evolved very different adaptations to killing.

The cat family comprises some of the most specialised carnivores in the history of mammals, all exclusively eating flesh. The cat family consists of two major sub-groups: the feline cats (including all modern species) and the sabertoothed cats (which are all extinct). Skeletons from the two groups look broadly similar, but their skulls are often remarkably different, and suggest that members of the two groups underwent radically different adaptations to predation during the course of evolution.

Sabertoothed cats have been a particularly difficult group to understand because their anatomical features are often radically different from those of modern cats. However, new techniques for anatomical comparison using digital methods have facilitated a more detailed comparison of the anatomy of the entire skull and mandible, and the new results add significantly to our understanding of the evolution of the cat family.

Maybe Manabu can comment a little more. This seems right up his alley.
Posted by Will Baird at Wednesday, July 30, 2008

On the other hand, the whole article (which I've read now) is kind of "duh." Different selective pressures made sabercats look different than felids. Go figure. I mean, you could say the same thing about spinosaurs and megalosaurs. Sister groups with different heads.