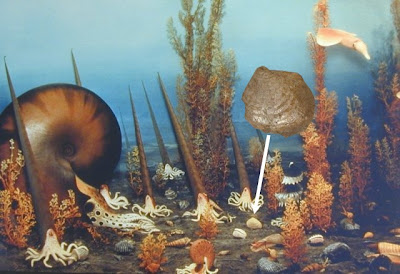 Diversity among the ancestors of such marine creatures as clams, sand dollars and lobsters showed only a modest rise beginning 144 million years ago with no clear trend afterwards, according to an international team of researchers. This contradicts previous work showing dramatic increases beginning 248 million years ago and may shed light on future diversity.

"Some of the time periods in the past are analogies for what is happening today from global warming," says Jocelyn Sessa, doctoral candidate in geosciences, Penn State. "Understanding what happened with diversity in the past can help us provide some prediction on how modern organisms will fare. If we know where we have been, we know something about where it will go."

Using contemporary statistical methods and the Paleobiology Database, the researchers report, in today's (July 4) issue of Science, a new diversity curve that shows that most of the early spread of invertebrates took place well before the Late Cretaceous, and that the net increase through the period since, is proportionately small relative to the 65 million years that elapsed.

One key to the new curve is the Paleobiology Database, (http://paleodb.org) housed at the National Center for Ecological Analysis and Synthesis, University of California, Santa Barbara. Previous research was based on databases of marine invertebrate fossils that recorded only the first occurrence of an organism and the last occurrence of the organism. There was no information in between for the organism.

"Over 30 years ago, researchers looked at the curve they had and considered that perhaps diversity did not increase at all," says Mark E. Patzkowsky, associate professor of geosciences. "What researchers saw was the diversity curve leveled off for quite some time and then took off exponentially. However, diversity results are strongly controlled by sampling techniques."

The new database allows researchers to standardize sample size because it includes multiple occurrences of each fossil. Researchers can randomly choose equal samples from equal time spans to create their diversity curve. This new curve uses 11 million-year segments, but the researchers hope to reduce the time intervals to 5 million years to match the interval of the previous curve, known as Sepkoski.

The data for this study contains 284,816 fossil occurrences of 18,702 genera that equals about 3.4 million specimens from 5384 literature sources. The old curve, developed by J. John Sepkoski Jr., used a database that contained only about 60,000 occurrences.

The researchers also looked at evenness in diversity. If there are 100 specimens divided into 10 time intervals, they could be divided with 10 individual specimens in each interval; or 91 specimens could be in one interval with one each in the remainder. The more even the distribution, the higher the evenness.

"Evenness says something about resource distribution," says Patzkowsky. "Much of invertebrate diversity has been attributed to diversity increase in the tropics, but the curve is not driven by that totally. It seems that 450 million years ago was not so different from today because it also contained more diversity in the tropics."

The major points of the Sepkoski curve are still seen in the new curve. Some things that are not seen, such as the decrease in diversity due to the Cretaceous Tertiary (KT) extinction 65 million years ago are not visible because of the scale of the intervals used. The extinction and recovery in the KT took less than 11 million years and so do not show. Some things not seen on the Sepkoski curve include a peak in the Permian. Also unexpected is that the diversity in the Jurassic (206 to 144 million years ago) is lower than diversity in the Triassic (248 to 206 million years ago), indicating a dip and rise in the diversity curve. The curve then rises in the Cretaceous and remains more or less flat after that. The previously thought exponential increase in diversity is not there.

Interesting. The Jurassic might have had less diversity than the Triassic which was recovering from the PT Extinction (and took a long time to do so).

I have a feeling that how you sample this greatly influences the results and I am sure that there are some nontrivial bits of clean up that need to happen as far as naming in the database. I've encountered this allegation a nontrivial number of times while reading on mass extinctions and the Sepkoski database.
Posted by Will Baird at Thursday, July 03, 2008