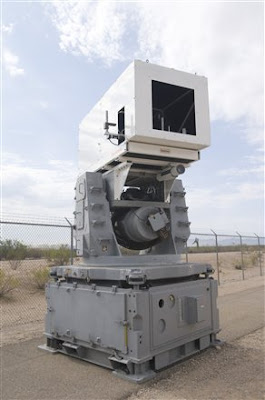 Two years ago, Raytheon performed a ground test in which two 60 mm mortar rounds were destroyed at 500 m range using an off-the-shelf commercial fiber laser - a 20 kW unit of the type used for welding and other industrial processes. This has now led to the prototype Laser Air Defense System (LADS), combining a 50 kW fiber laser and a beam director attached to a Phalanx gun mount.

50 kw is half the energy that has traditionally been claimed necessary to user lasers in a military role. This laser is a fiber laser, which means, iirc, it concentrates a number of much smaller diode lasers into a single beam using fiber optics. I have to wonder about the beam quality, but it is an interesting idea and seems to work. If that is the entire laser assembly in the phalanx mount pictured above then we're just about ready to place these on ships and dedicated AA vehicles. The goal would be to reduce this down so its a secondary system on all tanks or IFVs or whatnot.
Posted by Will Baird at Monday, July 14, 2008

Raytheon performed several tests in 2009 on a new MW class laser, thus enabling space to accept it as viable space defense. the laser, MRCAL was fully tested out. I actually have images of one on antarctica and a strike on a trident, that was very succ3essful. the trident did not make it off the surface of the ocean.