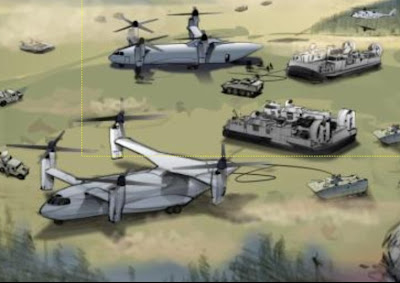 JHL is the vertical take-off and landing candidate for the U.S. Air Force/Army Joint Future Theater Lift (JFTL) requirement.The first of three contracts to extend previous concept definition and analysis (CDA) work for another two years has been awarded, with the others to follow over the next week or two, says the Army’s Aviation Applied Technology Directorate (AATD).

Contracts are being awarded to Bell-Boeing for the Quad Tilt Rotor, Karem Aircraft/Lockheed Martin for the Optimum Speed Tilt Rotor and Sikorsky for the coaxial-rotor X2 High Speed Lifter. The teams will update their designs to meet the new JHL model performance specification (MPS), which includes several new mission profiles that drive different aspects of the design.

Work under the CDA extensions will help decide whether JHL needs two or four engines and whether folding will be required for seabasing operations. AATD also plans to demonstrate flight control laws that could reduce airframe loads and lower empty weight. These will be tested in the Army/NASA Rascal flying laboratory, a modified UH-60 Black Hawk helicopter.

The JHL has a lot of promise. It fills a role that really would help make the units much more mobile. However, I can't help but smell the bloat starting to set in. Most of the time, whenever you have a cross service or joint project costs go up much faster than a singular service's more focused projects. Also, we already are seeing requirements creep here. That's really bad. That tends to make the costs go insane. Now its very early in the project, but whoever takes over as POTUS needs to have a SecDef that sits on these projects and keeps them from going foul like so many do.
Posted by Will Baird at Wednesday, July 02, 2008