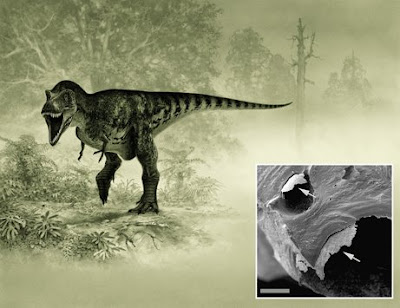 Paleontologists in 2005 hailed research that apparently showed that soft, pliable tissues had been recovered from dissolved dinosaur bones, a major finding that would substantially widen the known range of preserved biomolecules.

But new research challenges that finding and suggests that the supposed recovered dinosaur tissue is in reality biofilm – or slime.

"I believed that preserved soft tissues had been found, but I had to change my opinion," said Thomas Kaye, an associate researcher at the Burke Museum of Natural History and Culture at the University of Washington. "You have to go where the science leads, and the science leads me to believe that this is bacterial biofilm."

The original research, published in Science magazine, claimed the discovery of blood vessels and what appeared to be entire cells inside fossil bone of a Tyrannosaurus rex. The scientists had dissolved the bone in acid, leaving behind the blood vessel- and cell-like structures.

But in a paper published July 30 in PloS ONE, a journal of the open-access Public Library of Science, Kaye and his co-authors contend that what was really inside the T. rex bone was slimy biofilm created by bacteria that coated the voids once occupied by blood vessels and cells.

He likens the phenomenon to what would happen if you left a pail of rainwater sitting in your backyard. After a couple of weeks you would be able to feel the slime that had formed on the inner walls of the bucket.

"If you could dissolve the bucket away, you'd find soft, squishy material in the shape of the bucket, and that's the slime," Kaye said. "The same is true for dinosaur bones. If you dissolve away the bone, what's left is biofilm in the shape of vascular canals."

Co-authors of the new paper are Gary Gaugler of Microtechnics Inc. of Granite Bay, Calif., and Zbigniew Sawlowicz of Jagiellonian University in Poland.

Kaye said he began his research with the hope of being the second person to find preserved dinosaur tissues. In addition to the acid bath procedure used in the previous work, he added examination by electron microscope before the bones were dissolved. He was surprised by the findings.

The researchers found that what previously had been identified as remnants of blood cells, because of the presence of iron, were actually structures called framboids, microscopic mineral spheres bearing iron. They found similar spheres in a variety of other fossils from various time periods, including an extinct sea creature called an ammonite. In the ammonite they found the spheres in a place where the iron they contain could not have had any relationship to the presence of blood.

"We determined that these structures were too common to be exceptionally preserved tissue. We realized it couldn't be a one-time exceptional preservation," Kaye said.

The scientists also dissolved bone in acid, as had been done previously, and found the same soft tissue structures. They conducted a comparison using infrared mass spectroscopy and determined the structures were more closely related to modern biofilm than modern collagen, extracellular proteins associated with bone. Carbon dating placed the origin at around 1960.

Using an electron microscope, the researchers saw coatings on the vascular canal walls that contained gas bubbles, which they associated with the presence of methane-producing bacteria. In addition, they examined what looked like tiny cracks within the vascular canals and found that they were actually small troughs, or channels. Study at high magnification revealed the channels had rounded bottoms and bridged each other, indicating they were organically created, likely by bacteria moving in a very thick solution.

"From this evidence, we could determine that what had previously been reported as dinosaurian soft tissues were in fact biofilms, or slime," Kaye said.

What about the callogen tests then?

National Geographic has more (and provided the pic).
Posted by Will Baird at Wednesday, July 30, 2008