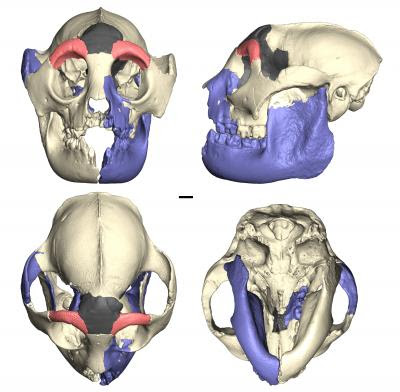 Penn State researchers have used computed tomography (CT) technology to virtually glue newly-discovered skull fragments of a rare extinct lemur back into its partial skull, which was discovered over a century ago. Alan Walker, Evan Pugh Professor of Anthropology and Biology at Penn State, and Research Associate in Anthropology Timothy Ryan, led the research. The different fragments of this lemur's skull are separated by thousands of miles, with the partial skull in Vienna and the pieces of frontal bone in the United States. The result of the digital manipulation is a nearly complete skull of Hadropithecus stenognathus, which is one of only two known skulls for this species. An article describing the work will be published in the early edition of the Proceedings of the National Academy of Sciences during the week of 28 July through 1 August 2008.

The digitally reunited remains offered new insights about Hadropithecus. For the first time, its cranial capacity (115 ml.) has been measured accurately. Because the excavators also uncovered many limb and trunk bones of the same individual lemur, the team could estimate its body size reliably. Surprinsingly, Hadropithecus was as big as a large male baboon and had a relative brain size as large as that of some large monkeys. In fact, the extinct lemur had one of the largest brains relative to its body size of any known prosimian (a group comprised of lorises, lemurs, bushbabies, and other similar animals).

The skull shape of Hadropithecus is unusual. Its skull vault sports a large, bony crest -- similar to that seen on gorillas -- for the attachment of powerful chewing muscles. With big chewing muscles, a deep jaw, and a flat face, the skull of Hadropithecus seems mechanically suited to eating hard foods, such as seeds or nuts. This idea is supported by microwear studies showing that the enamel of the Hadropithecus teeth is heavily pitted and scratched. However, while other animals that feed on hard objects have thick dental enamel and interwoven enamel prisms that prevent tooth breakage, Hadropithecus does not. Analysis of nitrogen and carbon isotopes in the bones of other specimens of Hadropithecus suggests a diet high in tough, fibrous succulents, tubers, or grasses -- not nuts or seeds. The team is investigating whether grit clinging to such plants in Madagascar would create the observed microwear pattern.

That skull is just plain funky. It does not look much like a lemur skull at all.

Anyways, sorry for teh paucity of updates. Pleasing the FAA, XPF, and USAF isn't always easy...;)
Posted by Will Baird at Monday, July 28, 2008

I'm having trouble finding your email address again, so I'll post here. We're planning to leave the state (off to OK via AZ, NM, and TX) on Saturday.

We've been busy enough that I didn't think to try to arrange a visit before we leave, so I want to apologize for that. I hope things continue to go well for you and your family (and I plan to stay subscribed to your blog, too).