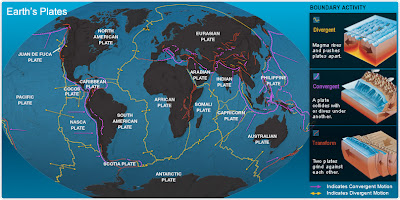 A newly identified fault running under the Adriatic Sea is building more of Croatia's Dalmatian Islands and bulking up the Dinaric Alps, a new study says.

Both the islands and the mountain chain—which runs along the upper western coast of the Balkan Peninsula—were believed to have stopped growing 20 million to 30 million years ago.

But scientists found that at the new fault the leading edge of the Eurasian tectonic plate is sliding over the South Adria microplate. (See a map of Earth's tectonic plates.)

"The southern Adria microplate is covered by a thick layer of buoyant rocks called carbonates," said lead researcher Richard A. Bennett of the University of Arizona in Tucson.

"As the Adria plate moves northeast toward Europe, the carbonate layer is scraped off of the microplate, much like snow in front of a snowplow."

Carbonates get piled up on the seafloor in front of the moving plate, forming new islands. Over millions of years the islands are squeezed together like folds in an accordion, which creates new additions to the nearby Dinaric Alps.

What's more, the fault is causing the southern "boot heel" of Italy to move toward the Croatian coast at a rate of about 0.16 inch (0.4 centimeter) a year, while the Adriatic seafloor is sliding under Croatia.

"If this process continues, eventually the seafloor will be completely consumed, bringing Italy into contact with Croatia," Bennett said.

This scenario means the Adriatic Sea could close up in about 50 million to 70 million years.

In a future world I drafted up once, the Adriatic was a chain of mountains that had very impressive canyons and valleys between then ancient Italy and the Dalmatian coast. I really ought to figure out a way to go back to that scenario and make a story out of it.
Posted by Will Baird at Friday, January 25, 2008