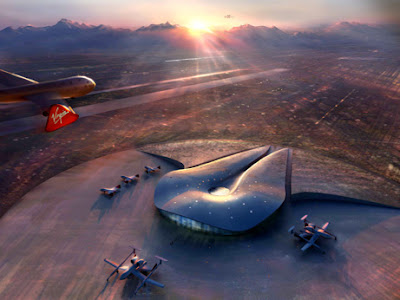 New Mexico's Spaceport America, which is being billed as the first "purpose-built" commercial spaceport in the United States, must conquer some challenging milestones that lie ahead if it is to open in late 2009 or early 2010.

The $198 million New Mexico spaceport project will have an 18,000 acre footprint that covers open, generally level range land north of Las Cruces and east of Truth or Consequences. This area was favored for its low population density, uncongested airspace and high elevation.

The spaceport is being designed to support a variety of commercial space businesses. It is intended to serve not only as a hub for the emerging suborbital space tourism market, but also eventually to become a center for handling orbital launch.

Steven Landeene, the newly appointed executive director for Spaceport America, settled into his new post Jan. 7 after his hiring in early December by the New Mexico Spaceport Authority Board.

It is clear that Landeene has hit the ground running — and needs to.

They have been talking about the space port in NM for a looooong time. This goes back to the mid to early 1990s, actually. I'm watching in an interested fashion if they can actually pull off the successful funding of this. It would be great if they can add yet another high tech center there in the desert. NM has a fascinating mix of the very high tech - Los Alamos, Sandia, White Sands, etc - and agricultural - cattle ranching, pecans, and most importantly CHILES!