A Little More on the Cretaceous Glaciers 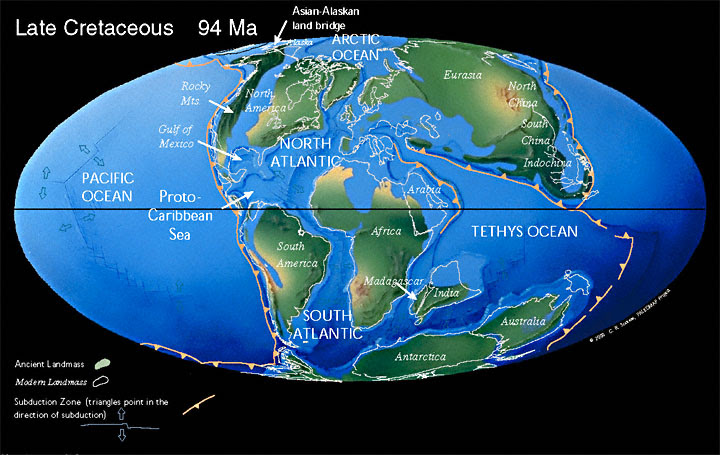 (image via Dr Scotese's website)
Yesterday I put up a post on the research that was just published stating that during the Cretaceous Thermal Maximum that there were glaciers in Gondwana. When I put up the post, I didn't have much time to think about it. I've had a couple minutes and now I have a couple comments to make. They're not super profound; however, they might have something to add to the discussion.

First off, this isn't that much of a revelation. The Riches in their work about their excavations at Dinosaur Cove in Australia found evidence of permafrost sometime ago. The fact that the southern polar region was really could was already established. If it was cold enough to have permafrost, it might be possible to have glaciers. This newest work seems to establish that, yes, indeed, there were.

It could be that the atmospheric circulation of the time would allow for a colder set of poles, at least in the southern hemisphere. There was no source of heat buffering down there that there was in the northern polar regions. In the north, the shallow, inland seas of NorAM provided a way for warm water to circulate up from the equator - stay warm - and reach the Arctic. This didn't have an equivalent down south. Therefore, even if the edges of the continent were quite warm, its entirely possible, probably through the Milkanovitch Cycles, polar summer-winter sunlight cycles, and increased albedo of snow and ice that an ice cap could have formed over south pole area of Gondwana. This would be in spite of the much warmer equator.

Shibbit. I am going to cut this short. I'll update it later.
Posted by Will Baird at Friday, January 11, 2008